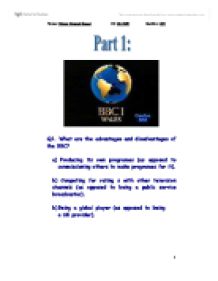 What are the advantages and disadvantages of the BBC?

Q1. What are the advantages and disadvantages of the BBC? a) Producing its own programes (as opposed to commissioning others to make programes for it). b) Competing for rating s with other television channels (as opposed to being a public service broadcaster). b) Being a global player (as opposed to being a UK provider). Traditionally public service broadcasting has conjured up a set of ideological and often political stereotypes, born in the main from an overall demeanour of middle class, institutionalized beliefs and practices. Post 1946, when television broadcasting resumed, the BBC's popularity was at its height, largely because of its part in the nations efforts during the Second World War, and there exists today, even for those born many years after the war, a resonance passed down through folk-memories, i.e. Winston Churchill's instantly recognizable speeches, broadcast by the BBC. Now, in the 21st century, BBC is having to redefine itself to both the public and politicians. ITV's too shares many of the current crisis' in broadcasting, predictably issues surrounding funding/revenue and it is also having to reassess its position in terms of self perception and audience perception. Now, I will I will explain the advantages and disadvantages for these choices, First if BBC should be a maker of programmes or a commissioner of programmers? Second, if it have to Competing for ratings with other television channels or being a public service broadcaster? Finally, if it should Being a global player or being UK provider? producing its own programmers Is it better to BBC to produce its own programs? This question is critical to BBC. I will explain the advantages and disadvantages for this decision-making. First I will talk about the advantages of being produce its own programs: 1-help UK society to keep its traditional and norms: The BBC will help UK community to save the culture & the norm & value of society, by producing it is own programs this give it the freedom to introduce programs could preserving that culture save ...read more.

A big part of these programmers are produced for the global audience & far away from the British tastes. People start to look at the BBC as a commercial company not public service broadcaster. Conclusion As I have showed in the beginning, the BBC carries a weight of history which can provide it the authority, power, influences and reduce its weakness, unlike any other broadcasting organization in the world, but sure this will need from BBC to make its moves slowly, steadily and not to make a big mistake. (1,642 words) Q2. Based on the economic, organizational, socio-political and cultural features surrounding the BBC which are outlined in the Case study, what is your advice to the top- level management of the BBC on the process of decision making which they should adopt in order to avoid making flawed decisions with respect to their response to the three strategic dilemmas? One of the most important operations in the organization is the decision making processes. Managers should know the structure of the decision making process to avoid any problems could show and they should learned from the past problems in taking decision in the future. Decision making can be defining as process or action that means recognizing and defining the nature of a decision situation identify alternatives, choosing the best one and putting it into practice. BBC needs to do many things to lead the organization for more success. They need to follow the decision making processes step by step. Especially after the three dilemmas that the British government obliged it to follow. That's what I will mention below. Then I will give them my advice in order to survive in these rapid changes in the new technology world. I will mention the actual process of organizational decision making which include the following steps which I think if the Top-management of the BBC follows it they will get a stable and endless successful: Organizational Goals This theory means that the managers of the BBC have ...read more.

So we can say that they responses to the government rules without reorganization but after they recognize that they follow the new rules under new strategies. Writers Marks and Gran, in their joint MacTaggart speech in 1997, argued that the BBC, in an effort to gain audiences, had adopted the same mass-market popular programming as ITV, with soap operas, panel games and doctor and detective dramas forming the bulk of the schedule. Dilemma 3: Global organization v. UK provider If we think about the BBC as national, supra-national or international govt. or combination of all three. We will find that it is a combination because at the first it was national then it becomes a supra-national and after the new technology emergences like the Tivo and EPG and after the new market and other competitive channels showed in UK. They recognize that they have to a global organization. "in the digital world of multichannel choice, the need for the BBC will be greater, not less. Real choice means genuine programme diversity that guarantees something for everyone. That is what the BBC exists to deliver. We will sustain the services that audiences know and trust, but we will also launch new ones and so continue to extend choice. As a public service broadcaster, funded by a universal licence fee, the BBC has a responsibility to make its services available on every television delivery system that licence payers will use-cable, satellite and terrestrial". (Birt I BBC Online, 1998). So, we can see that the BBC responded to the requirements of both the market and government regulation. So the BBC responded to all the three dilemmas in one way or another, whatever they recognize that or not. They do, even sometimes that this new strategy eliminated their creative work. "It can be argued that the BBC's success as a national broadcaster- along with the other main UK broadcasters- is hampering its efforts to exploit its programmes on the world market". (932 words) Name: Muna Hamad Saeed ID: 02-1947 Section: 207 1 ...read more.

*** This essay attempts to summarise the advantages and disadvantages of the BBC, including some historical context. It is clearly structured and incorporates some good ideas but often lacks clear expression and correct grammar and spelling. This can make it difficult to read at times.