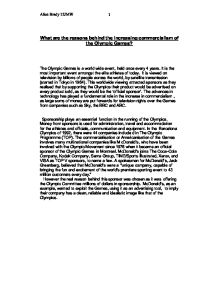 What are the reasons behind the increasing commercialism of the Olympic Games?

What are the reasons behind the increasing commercialism of the Olympic Games? The Olympic Games is a world wide event, held once every 4 years. It is the most important event amongst the elite athletes of today. It is viewed on television by billions of people across the world, by satellite transmission (started in Tokyo in 1964). This worldwide viewing attracted sponsors as they realised that by supporting the Olympics their product would be advertised on every product sold, as they would be the 'official sponsor'. The advances in technology has played a fundamental role in the increase in commercialism, as large sums of money are put forwards for television rights over the Games from companies such as Sky, the BBC and ABC. ...read more.

However the real reason behind this sponsor was chosen as it was offering the Olympic Committee millions of dollars in sponsorship. McDonald's, as an example, wanted to exploit the Games, using it as an advertising tool, to imply their company has a clean, reliable and idealistic image like that of the Olympics. The Salt Lake Organising Committee received approximately US$ 1,390.5 million from Olympic marketing programmes, but a question asked by many is Where exactly does all the money come from? The pie chart below shows the percentages of dollars coming in from commercialism from a typical Olympics: Each sponsor wants the right to print the famous '5 rings' on their product. ...read more.

Although this appears to be an advantage for the country, the Montreal Olympics of 1976 are still today paying off their debts after trying to 'put one over' the Munich games of 1972. The Olympics Games were first launched to encourage world unity and peace, however as recent Games have demonstrated, people are no longer solely interested by the sporting events, but are thriving on being the best. I believe that commercialism has both saved and destroyed the Games. The whole ethos of 'it's not the winning but the taking part that counts' (Baron Pierre de Coubertin) is no longer around, and that now the Olympics is simply becoming another victim of being used as a market for advertising. Word Count: 640 1 Alice Brady 12JMW ...read more.