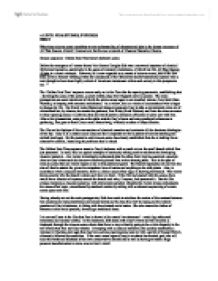 What does mise-en-scene contribute to our understanding of character and plot in the chosen sequence of All That Heaven Allows? Discuss how far this use is typical of Classical Narrative Cinema.

A LEVEL FILM STUDIES, EVENINGS ESSAY What does mise-en-scene contribute to our understanding of character and plot in the chosen sequence of All That Heaven Allows? Discuss how far this use is typical of Classical Narrative Cinema. Chosen sequence: Golden Rain Tree/Cary's bedroom scene. Before the emergence of 'auteur theory' the director Douglas Sirk was a renowned exponent of classical Hollywood narrative, particularly in the genre of romantic melodrama, of which his film All That Heaven Allows is a classic example. However, he is now regarded as a master of mise-en-scene, one of the few tools left to a director working within the constraints of the Hollywood studio/institutional system who is now thought to have been highly critical of American mainstream culture and society in this prosperous era. 1, 2 The 'Golden Rain Tree' sequence occurs early on in the film after the opening panoramic, establishing shot - showing the scene of the action, a small middle-class New England town in autumn. The main protagonists are soon introduced of which the prime causal agent is an unsettled woman, Cary Scott (Jane Wyman), in keeping with romantic melodrama. As a widow, she is a victim of circumstance who is eager to change her life. Her friend visits (Mona) and hopes to persuade Cary to take a conventional route out of widowhood but, by chance, she meets the gardener, Ron Kirby (Rock Hudson) ...read more.

Beside Ron's branch in the vase on the elegant dressing table, Cary is shown looking thoughtfully but in an unhappy way at a reflection of herself in the dressing table mirror. Most people use a mirror on a daily basis, but Cary is shown to be something of an observer of life, refraining from fully engaging in the social events of the town. Sirk presents Cary as person incarcerated in her natural domain - the dark lighting and clinical features of the bedroom suggest that anyone stuck inside such a room would want to move to a more natural environment (such as Ron's). Cary is also frequently shown contained within frames - in the twig scene she is framed not only by the mirror but also the larger window. In terms of the narrative structure, Cary is stuck in a situation from which she must escape; a liaison with any of the conventional suitors (such as Harvey) would be equally unattractive, based in the same milieu. The stylized lighting favoured by Sirk is also put to good effect. After Cary has finished reviewing her appearance, and presumably her position in life, from the same mirror her adult children are shown entering the room. They enter from a bright, shining hallway (in accordance with their happy, fulfilled situations) ...read more.

In one scene, Gardiner is dressed like a figure in a bowler hat from a Magritte painting as he walks, in the middle of the road surrounded by traffic, up a central avenue in Washington, with the distant Capitol Hill/Congress building apparantly on his head at the top of the avenue. However, despite its exotic nature, this imagery is entirely in keeping with the classical narrative as, later on, Gardiner moves towards the head of the political structure. In summary, All That Heaven Allows relies on mise-en-scene to provide the viewer with additional character and plot information. Sirk's use of mise-en-scene gives additional clues as to Cary's initial mental state (dark colours symbolising a depressed mood, etc) and the developing plot (the branch signifying her affection and intentions towards Ron). If none of these visual clues were present, the viewer would be much less informed about Cary's emotional state and there would be less certainty about the course of the developing narrative. With regard to the wider use of mise-en-scene, this is certainly typical of classical narrative cinema. In Being There, the character and motives of Gardiner are made much clearer to the viewer through the imaginative use of mise-en-scene, as illustrated above. NOTES 1. Carroll. Essay The Moral Ecology of Melodrama: The Family Plot and Magnificent Obsession. p. 170. 2. Cook. p. 76-79. ...read more.