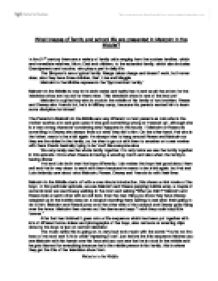 What images of family and school life are presented in Malcolm in the Middle?

What images of family and school life are presented in Malcolm in the Middle? In the 21st century there are a variety of family units ranging from the nuclear families, which are immediate relatives, Mum, Dad and children, to the extended family, which also includes Grandparents and cousins, who play a part in daily life. The Simpson's are a typical family. Marge takes charge and doesn't work, but Homer does, also they have three children, Bart, Lisa and Maggie. Malcolm in the Middle represents the 'Symmetrical Family.' Malcolm in the Middle is now in its sixth series and sadly has to end as all the actors for the television show are too old for there roles. This television show is one of the best yet! Malcolm is a gifted boy who is stuck in the middle of his family of two brothers, Reese and Dewey also Francis but, he's in Military camp, because his parents wanted him to learn some discipline for himself. The Parents in Malcolm in the Middle are very different to most parents as Lois who is the mother worries a lot and gets upset if she gets something wrong or 'messed up', although she is a very strong character concerning what happens in the house. ...read more.

Just before the title sequence finishes you see Malcolm with his hands over his face and you can see that he is stuck in the middle and he gets blamed for everything because he is the middle person in his family, this is where they get the title of the television show from. The camera/editing work is extremely good in Malcolm in the Middle as they use lots of different camera shots for the show, such as when Reese gets beaten up by a girl in his wresting match. The camera makes the girl look really huge and strong and makes Reese look like a small mouse, it does this by using 'up shots.' Also, another camera shot is a down shot, you can see this when Malcolm gets beaten up because he can be too sarcastic with his friends and sometimes his family. When scenes change the camera uses a technique which swashes around and looks really good as not many other television shows show this. The music in Malcolm in the Middle is all mostly loud, rhythmic rock music, when dramatic scenes are taking place, for example when Malcolm gets beaten up, when Reese gets beaten up and also when Reese becomes the school bully again. ...read more.

Most people can relate to the relationship Malcolm has with his brothers. Reese who can be really mean but at home acts nice so he doesn't get in trouble with his parents. Dewey is the smallest and youngest so Reese and Malcolm love messing around with him you can see them messing around with him at the beginning with the one minute introduction, however after all the fighting and screaming at each other has finished, they all stick up for each other at school. American and British audiences say that "It is the best pre-washed family comedy in years!" Fox network also said "This is Fox Networks strongest family sitcom to date." One critic said "Malcolm in the Middle not only uses a strong family, who, despite their problems, support each other, but also that the family strongly represents family life as recognised by its audiences." In conclusion, I feel that Malcolm in the Middle appeals to a range of ages and it celebrates family life as well as humorous situations. It is a real shame that now, after six series it has to end. I can definitely relate to this programme and everything that goes on in it. I'm sure everyone will remember Malcolm in the Middle. Hopefully Sky, Fox Networks and any other channels that show the television show will show repeats so everyone knows about Malcolm in the Middle. ?? ?? ?? ?? Malcolm in the Middle ...read more.