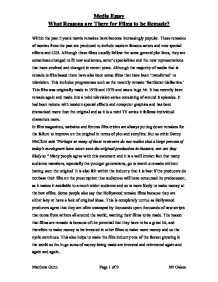 What reasons are there for films to be remade?

Within the past 5 years movie remakes have become increasingly popular. These remakes of movies from the past are produced to include modern famous actors and new special effects and CGI. Although these films usually follow the same general plot lines, they are sometimes changed to fit new audiences, actor's specialities and the new representations that have evolved and changed in recent years. Although the majority of media that is remade is film based there have also been some films that have been 'transferred' to television. This includes programmes such as the recently remade 'Battlestar Gallactica.' This film was originally made in 1978 and 1979 and was a huge hit. It has recently been remade again and made into a mini television series consisting of around 8 episodes. It had been redone with modern special effects and computer graphics and has been dramatised more than the original and as it is a mini TV series it follows individual characters more. In film magazines, websites and forums film critics are always putting down remakes for the failure to improve on the original in terms of plot and storyline. But as critic Danny McClure said "Perhaps so many of these reviewers do not realize that a large percent of today's moviegoers have never seen the original production in theaters, nor are they likely to." Many people agree with this statement and it is a well known fact that many audience members, especially the younger generations, go to watch a remake without having seen the original. It is also felt within the industry that it is best if the producers do not base their film on the presumption that audiences will have consumed its predecessor, as it makes it available to a much wider audience and so is more likely to make money at the box office. Some people also say that Hollywood remake films because they are either lazy or have a lack of original ideas. ...read more.

This idea was injected into us and we accept it in the context of the film, and do not question it unless we are again told to by the product. If we are a passive audience we would not begin to question the ideas that were put across by the product and may even begin to believe that there is actually going to be an invasion of giant robotic 'toasters' that will destroy all of mankind. Obviously any normal person would never believe this and this is why it has been widely discredited as it presumes that all members of the audience are virtually cabbages and make no attempt to gain meaning from any media product. Despite the fact that it was flawed it was unwillingly tested on October 30, 1938 by Orson Welles and the Mercury Theatre Group during a broadcast of their radio edition of the H.G. Wells Novel 'War of the Worlds.' At the end of the biggest action sequence in the book the Radio broadcast was interrupted with a "news bulletin" for the first time. What the audience heard was that Martians had begun an invasion of Earth. Around twelve million people in the United States heard the broadcast and about one million of those actually believed that a serious alien invasion was underway! A wave of panic ensued. The whole nation was in a state of chaos, and this simple broadcast was the cause of it! The effects of the broadcast suggested that the media could easily manipulate a passive and gullible public by simply telling them untrue facts within otherwise factual programs and mediums. This shows that it is still an important theory, especially in terms of the historical development of media theory and knowledge. I have also discovered that the films that I am studying link closely to a narrative theory proposed by Todorov. This theory states that all pieces of fictional media follow the same basic structure. ...read more.

A strange tactic for advertisers that seemed to work extremely well. Technology has also increased a lot in the years since the original release of the original films 'Battlestar Galactica' and 'The Italian Job'. This includes the CGI effects that have been used in this film and also the general media technology such as the cameras used to get new exciting camera angles, sounds equipment that was used and even the general technology used throughout the film such as mobile phones, laptop computers and safe breaking kits that were not available in 1969 when the film was originally made. There are many points throughout the film where CGI or is used extensively. This includes the shots such as seeing the wheels of the safe clicking into place and the views of the inside of the computer and the equipment. It is also used when information is seen traveling along a line and at other various places throughout the film. Also other techniques such as digital compositing, morphing and motion control photography are used throughout the movie. Stunt effects and technology have also been greatly improved in recent years. Pyrotechnics, cable technology and rigging techniques have also been greatly improved and linked with computer interfaces to make the stunt look exactly as it is expected to look. On the computer supporting ropes and beams can be easily removed so instead of falling 500 feet with a safety wire it can appear that the actor falls 500 feet into nothing but air. These sorts of improved special effects and stunts can also make the new movie more attractive to prospective audiences who can compare it to the effects from the original. Sales at the box office for the remake of the movie were even higher than the original bringing in an estimated $106,126,012, making it number 286 in the all-time US box office stats. I believe that this is because of both the huge publicity, link to the original, huge actors, huge budget and the huge advertising campaign that was launched for it as to why it made so much money. ...read more.