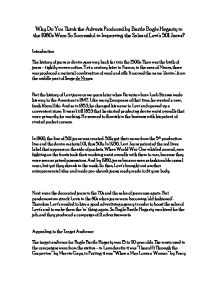 Why Do You Think the Adverts Produced by Bartle Bogle Hegarty in the 1980s Were So Successful in Improving the Sales of Levi's 501 Jeans?

Why Do You Think the Adverts Produced by Bartle Bogle Hegarty in the 1980s Were So Successful in Improving the Sales of Levi's 501 Jeans? Introduction The history of jeans or denim goes way back far into the 1500s. Then was the birth of jeans - tightly woven cotton. Yet a century later in France, in the area of Nimes, there was produced a material combination of wool and silk. It earned the name 'denim', from the middle part of Serge de Nimes. But the history of Levi jeans came years later when Bavarian born Loeb Strauss made his way to the Americas in 1847. Like many Europeans of that time, he wanted a new, fresh liberal life. And so in 1853, he changed his name to Levi and opened up a convenient store. It wasn't till 1853 that he started producing denim waist overalls that were primarily for working. He seemed to flourish in the business with his patent of riveted pocket corners. In 1890, the line of 501 jeans was created. 501s get their name from the 5th production line and the denim material 01, thus 501s. In 1936, Levi Jeans patented the red lives label that appears on the side of pockets. When World War One whirled around, men fighting on the fronts took their working waist overalls with them to war, because they were seen as prized possessions. And by 1960, jeans became seen as fashionable casual wear, but yet they shrunk in the wash. ...read more.

These themes appealed to the adolescent age since it is their time of life where they become interested in the opposite sex, therefore the target audience can relate. Also, the advertisements in the campaign seems to run the 'old versus young' feel, such as in Launderette, when the older, heavyset man looks at Levi's man just doesn't ease, or in Fridge, when the elderly owner of the diner gives a disapproving look to Levi's man. Recurring Images Throughout the campaign, there was strong use of recurring images. The advertising agency would insert a lot of red in the advertisements to refer to the red patent Levi's label. There would be a red dash to some scenes, or lights with a red glow. In Launderette there were boys with red caps. No matter what type of commercial it was, Bogle Bartle Hegarty found ways to incorporate red, from red brush bristles in Parting, to red peppers in the refrigerator in Fridge. And again, in Beach, the girl was wearing a cap with a red peak. Other recurring images where close up views of backsides to show the comfortable fitting of the jeans, or the unique 501 button fly. They also did close ups on the belt pulling motion. Ray bans were a recurring image and there was usually a steamy atmosphere in the Levi advertisements. White underwear - particularly boxer briefs - were a recurring image. Motorcycles too were seen a lot, helping carry along the rebellion flavour. ...read more.

but if you are a nerdy, wimpy boy (using the nerdy boyfriend in the advertisement to get this idea across), you don't where Levi's. Yet the message was that Levi's are strong, and the showed this by using Levi's jeans to tie the car and truck together, in order to toe the car. Beach had a more west coast twist with the beach scene. Its caption was "Levi's have always been sought after", since the girl wanted to wear the Levi's that she found at the beach. Nevertheless, the message was that Levi's gets you the girls, a commercial clearly directed to the guys. All these messages and captions were thought of by Bogle Bartle Hegarty cleverly in order to make Levi Jeans appealing. Conclusion As a result of the 1980s Levi's 501 campaign, the post advertising sales went from 131 to 2042! A huge demand was created, showing a great success, but not only was there a demand increase in the sales for jeans, but also the recurring whites boxers featured in the advertisements. The impact of the campaign even made celebrities out of the persons playing 'Levi's man' in the advertisements and it promoted the music which had been used in them, causing sales in them to rise also. So clearly, as you can see, the 1980s Levi's 501 Jeans Campaign was a 110% success because of the tactics used - recurring images, American themes, and appealing music all mastered together caused the success of the campaign of Levis 501 jeans. By: Olivia Riley, 10R ...read more.