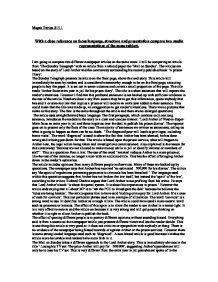 With a close reference on focus language, structure and presentation compare two media representations of the same subject.

Megan Davies. S H.1 With a close reference on focus language, structure and presentation compare two media representations of the same subject. I am going to compare two different newspaper articles on the same event. I will be comparing an article from 'The Sunday Telegraph' with an article from a tabloid paper the 'Mail on Sunday'. The articles are based on the story of Lord Archer and the controversy surrounding his recently published book 'A prison Diary'. The Sunday Telegraph presents its article on the front page, above the lead story. This article will immediately be seen by readers and is considered newsworthy enough to be on the front page, attracting people to buy the paper. It is set out in seven columns and covers a small proportion of the page. The title reads 'Archer faces extra year in jail for his prison diary'. The title is a short statement that will capture the reader's attentions. However I find that this profound statement is not backed up with sufficient evidence in the rest of the article. Nowhere does it say from source they have got this information, quote anybody that has said it or state any law that implies a prisoner will receive an extra year added to their sentence. ...read more.

It appears to disagree with this punishment for Archer, depicting it as unfair. The article from The Mail on Sunday spreads over 2/3s of a page. It is at first glance more interesting than the previous article because it contains a large color picture of Lord Archer and his wife, and a smaller picture of the book he has recently published. Articles with pictures beside them seize the reader's attention. The caption under the picture of Archer and his wife reads 'inside job:' which suggests a crime has been committed from inside prison. 'Inside job' is a word used to refer to those who use their access to privileged information to commit a crime. It is an exaggerated and dramatic term to use, which will catch the reader's interest. 'Archer could pocket a fortune from his prison diary, left, which could ease his and wife Mary's cash flow problems' This sentence is intended to be humorous because it is sarcastic. The lord and lady are not expected to have any money troubles or 'cash flow problems'. Humor is a method used by journalists to incite their readers. ...read more.

I found the main differences between them were the main facts of their stories, the punishments disagreed with each other. They both used different techniques for get the readers attention. The purpose of this was to capture and maintain an interest in the article. The overall purpose is to sell newspapers, and make money. The Sunday Telegraph is known to be a more trustworthy newspaper than tabloids such as the Mail on Sunday. The article in the Sunday Telegraph was a straightforward news event and it had no signs of being biased. All the facts were presented The Mail on Sunday appealed more to people's need for gossip and scandal, it tried to make the reader feel annoyed and shocked. This article was better at catching the reader's eye because of the layout and bright pictures. I think the Mail on Sunday also did a better job of maintaining the reader's interest because most people like to read about the more scandalous side of stories and it is more interesting when an article sways your emotions. The Sunday Telegraph, can be trusted to give a relatively non-biased true account but it is less interesting to read. The language in both articles was very similar; both used simple, factual writing backed up with quotes. ...read more.