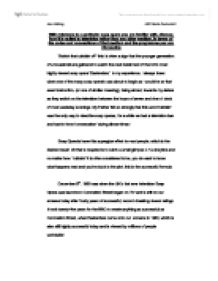 With reference to a particular soap opera you are familiar with, discuss how it is suited to television rather than any other medium, in terms of the codes and conventions of that medium and the programme you are discussing

With reference to a particular soap opera you are familiar with, discuss how it is suited to television rather than any other medium, in terms of the codes and conventions of that medium and the programme you are discussing 'Switch that rubbish off!' this is often a sign that the younger generation of a household are gathered to watch the next instalment of the UK's most highly viewed soap opera 'Eastenders'. In my experience, I always knew when one of the many soap opera's was about to begin as I would hear that exact instruction, (or one of similar meaning), being aimed, towards my sisters as they switch on the television between the hours of seven and nine o' clock of most weekday evenings. My Father felt so strongly that this word 'rubbish' was the only way to describe soap operas, for a while we had a television ban and had to force 'conversation' during dinner times! Soap Opera's have this superglue effect to most people, which is the desired result. All that is required is to catch a small glimpse of a storyline and no matter how 'rubbish' it is often considered to be, you do want to know what happens next and you're stuck to the plot, this is the successful formula. ...read more.

Again, this is very believable and I've certainly seen it before. When it comes to props for individual characters, the most identifiable would be that of Pat Butchers huge earrings, which seem to get bigger and more wild as the years go on but strangely enough, you do see people turned out like this in the Eastend and though you wonder why, it is a code which should be included because it's realistic and is a great example of key observation by the Eastenders research team. They also cleverly use simple items such as fruit machines, dartboards and the statue of Queen Victoria's Head in the pub itself to bring together all aspects of the traditional East-end local. The set itself is based at Elstree studios in Hertfordshire and is filmed on a real street used as the set. A lot of research has obviously gone into creating the right location, as everything seems very realistic, even minor aspects such as the Arthur Fowler memorial bench in the middle of the street, the high steps leading up to the houses, the local pub with the market outside, the fish and chip shop and the underground train station; it all fits together nicely to connote a typical London area. ...read more.

In her 2003 book 'Soap Opera', Dorothy Hobson suggests that Eastenders cannot work to it's full 'individual' potential by any other existing medium than television from the fact that it shows a 'Cultural' London. She states that other media forms would only show a Metropolitan view, as Cultural media productions are best suited for television. 'Eastenders embraces the modern version of the East End and has shown to be multicultural by consistently including a wide range of Asian and black, first and second generation Londoners. Eastenders has integrated good and bad characters, as representations of many cultures, creeds and colours'. Another view is that of Ron Simon from the Museum of Television and Radio who claims that television makes Eastenders easier for people to relate to, as they can sometimes see parts of their own lifestyles around the characters on screen, viewing things they have experienced themselves. On the radio they are never sure exactly what the image is supposed to be, Eastenders is directed at that basis of human relation. I believe that the majority of the codes used in Eastenders cannot be transferred to the viewer by any other medium as successfully as television proves to do so today. When a new medium overcomes television in this field, a whole new Soap Opera era will begin. ...read more.