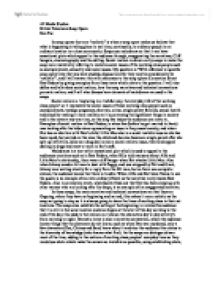 &quot;With reference to specific soap opera texts that you have studied discuss how far they may be considered to be 'Realistic'&quot;, is that they make the soaps as realistic as possible using Technical and Narrative conventions

In soap operas the term "realistic" is when a soap opera makes us believe that what is happening is taking place in real time, continually, to ordinary people in an ordinary location in a close community. Soaps use melodrama so that it can have sensational plots which appeal to the audience through, exaggerating the narratives, Cliff hangers, cinematography and the editing. Social realism is drawn on by soaps to make the soap more realistic by referring to realistic social issues of the working class people such as unemployment, sexuality and racial issues. My question is "With reference to specific soap opera texts that you have studied, discuss how far they may be considered to be 'realistic'", and I will answer this with references to the soap operas Coronation Street East Enders by giving examples from these texts which relate to the question. I will also define and talk about social realism, how the soap narratives and technical conventions promote realism, and I will also discuss how elements of melodrama are used in the soaps. ...read more.

In these soaps, the main narrative and technical conventions are that they are Ongoing, where they have no beginning and no end, this makes it more realistic as the soap not going to stop so it is always going to show the lives of working class in their set locations. The soaps also establish the setting at the beginning, to remind the audience that it is still in the same location and also begins at the start of the day working to the end of the day, this adds to the realism as it shows the characters day to day activity's from morning to night. Dramatic irony is also a narrative convention, where the audience knows things that the characters do not know, such as when Den was murdered, only a few characters (Zoe, Chrissy and Sam) know about it and also the audience this relates to the hierarchy of knowledge (who knows what first). As the soaps are dialogue driven most of the time, adding to the realism of working class peoples' everyday lives so they would use shots which make the camera as invisible as possible, using establishing shots, over-the-shoulder shouts two shots, mid close ups and extreme close ups. ...read more.

Also when Patrick entered East Enders he was stereotyped to be a traditional African where he liked drinking alcohol, and was a girl's man. The women are also represented as house wives and those who look after the kids such as Rosie Miller, who looks after the house while her husband does nothing. To conclude my opinion for the question "With reference to specific soap opera texts that you have studied discuss how far they may be considered to be 'Realistic'", is that they make the soaps as realistic as possible using Technical and Narrative conventions stated above, where everything from camera shots to sounds are used to make the soaps more realistic such as no non-digetic sound tracks during the soap and putting it in as digetic sound in environments such as pubs. Representations of the Ethnicity adds to the realism of these soaps and the issues that are brought up in the narratives of the soaps add to the realism as these issues are dealt with in everyday life of working class people in the society. ?? ?? ?? ?? A2 Media Studies British Television Soap Opera Ken Tse ...read more.