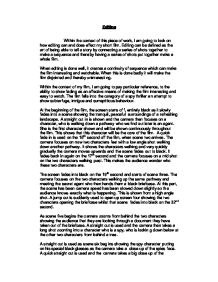 Within the context of my film, I am going to pay particular reference, to the ability to show fading as an affective means of making the film interesting and easy to watch.

When editing is done well, it creates a continuity of sequence which can make the film interesting and watchable. When this is done badly it will make the film disjointed and thereby uninteresting.

Within the context of my film, I am going to pay particular reference, to the ability to show fading as an affective means of making the film interesting and easy to watch. The film falls into the category of a spy thriller an attempt to show subterfuge, intrigue and surreptitious behaviour.

At the beginning of the film, the screen starts off, entirely black as it slowly fades into a scene showing the tranquil, peaceful surroundings of a refreshing landscape. A straight cut in is shown and the camera then focuses on a character, who is walking down a pathway who we find out later is an agent. She is the first character shown and will be shown continuously throughout the film. This shows that this character will be the core of the film. A quick fade in is used on the 15th second off the film, when scene two arrives. The camera focuses on now two characters feet with a low angle shot walking down another pathway. It shows the characters walking and very quickly gradually the camera moves upwards and the scene fades out to black. It fades back in again on the 17th second and the camera focuses on a mid shot on the two characters walking past. This makes the audience wonder who these two characters are.

The screen fades into black on the 19th second and starts of scene three. The camera focuses on the two characters walking up the same pathway and meeting the secret agent who then hands them a black briefcase. At this part, the scene has been camera speed has been slowed down slightly so the audience knows exactly what is happening. This is shown from a high angle shot. A jump cut is suddenly used to open up screen four showing the two characters opening the briefcase whilst that scene fades into black on the 32nd second.

As scene five begins the camera zooms from behind the two characters showing the audience that they are looking through a document they have taken out of the briefcase. A straight cut is used and the camera then takes a long shot zooming into a character who is a spy, who is looking down below at the other two characters from behind a tree.

A straight cut is used as scene six begins showing the spy character putting on his special black glasses as the camera take a close up of the spies face. A quick straight cut is used and the camera takes a big close up of the document the two characters were looking through in the last scene reading ‘your eyes only’ and that scene fades into black after the 1st minute of the film.

Scene seven begins showing the agent walking down a long pathway whilst the camera zooms out. The scene then fades to black after the 1st minute and 8th second. Quick straight cut shots are shown of the agent looking around whilst she is waiting for the spy. This scene in particular has been fast forwarded to show the build up the tension and to make the audience think what will happen next. Short shots are shown of the agent looking around, checking the time on her watch and the screen fades out every time she does something.

Scene eight begins with the spy walking out from behind and meeting the agent. A small item is being handed over from him to her, as the camera takes a close up. It then shows the two characters shake hands as the scene fades out into black after 2minutes.