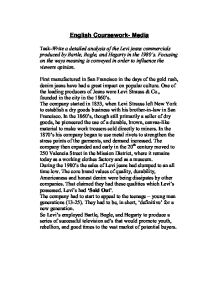 Write a detailed analysis of the Levi jeans commercials produced by Bartle, Bogle, and Hegarty in the 1980&amp;#146;s.

English Coursework- Media Task-Write a detailed analysis of the Levi jeans commercials produced by Bartle, Bogle, and Hegarty in the 1980's. Focusing on the ways meaning is conveyed in order to influence the viewers opinion. First manufactured in San Francisco in the days of the gold rush, denim jeans have had a great impact on popular culture. ...read more.

In the 1860's, though still primarily a seller of dry goods, he pioneered the use of a durable, brown, canvas-like material to make work trousers sold directly to miners. In the 1870's his company began to use metal rivets to strengthen the stress points of the garments, and demand increased. ...read more.

That claimed they had these qualities which Levi's possessed. Levi's had 'Sold Out'. The company had to start to appeal to the teenage - young man generations (13-25). They had to be, in short, 'definitive' for a new generation. So Levi's employed Bartle, Bogle, and Hegarty to produce a series of successful television ad's that would promote youth, rebellion, and good times to the vast market of potential buyers. ...read more.