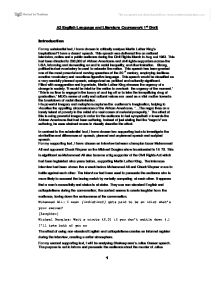 A2 English language and literature coursework

Introduction For my substantial text, I have chosen to critically analyse Martin Luther King's inspirational 'I have a dream' speech. This speech was delivered live on national television, radios and a public audience during the Civil Rights March in August 1963. This had been directed to 200,000 of African Americans and civil rights supporters across the USA, informing and demanding an end to racial inequality, and discrimination. Strong, political lexical vocabulary is used to educate the nation. This speech has been granted one of the most powerful and moving speeches of the 20th century, employing faultless emotive vocabulary and countless figurative language. This speech would be classified as a very carefully planned speech, categorized as political and culturally significant. Filled with exaggeration and hyperbole, Martin Luther King stresses the urgency of a change in society. 'It would be fatal for the nation to overlook the urgency of the moment.' 'This is no time to engage in the luxury of cooling off or to take the tranquilizing drug of gradualism.' MLK's sense of unity and cultural values are used as a vital motive towards the breakdown of racial discrimination. His powerful imagery and metaphors captures the audience's imagination, helping to visualise the appalling circumstances of the African Americans. '...The negro lives on a lonely island of poverty in the midst of a vast ocean of material prosperity.' ...read more.

For Brutus is an honourable man; So are they all, all honourable men - Come I to speak in Caesar's funeral. Comparative Literary techniques and linguistic features In Antony's speech, as it was delivered in the pre 20th century, Shakespeare chose to write the speech in Blank verse, normally presented for noble and high status characters. Shakespeare used blank verse for Antony in order to suggest his authority to the audience, providing a formal register. 'I thrice presented him a kingly crown.' The extract doesn't contain any rhyme, however it has a rhythmic pattern which develops as the speech goes on. This attracts the audience to listen more to his speech. In Martin Luther King's speech it had been identified as important through his formal register and Standard English. He applies parallelism continuously to the speech to also create a rhythm and a poetic flow, creating a poignant image for the audience. 'One hundred years later, the Negro lives on a lonely island of poverty in the midst of a vast ocean of material prosperity.' Muhammad Ali's interview doesn't incorporate any rhythm or any poetic flow, as the conversation isn't structured formally as the other texts. However, it is memorable and persuasive as he employs rhetoric literary language, applying extended metaphors to his speech. Muhammad Ali: //You don't have a chance (.) ...read more.

There ain't no way in the world you gonna whoop me [Moves forward] I'm gone sweep the ring up in with you (1.0) I'm gone clean up the ring right here on television I want the whole world to see that I'm the true champion of the world(.) Joe Frazier (.) Kid Jark-naughton (.) all of them chuck- Ain't nobody that can whoop me His assertion towards the opponent is taunting for a more aggressive response, heightening the atmosphere of the conversation. Muhammad Ali: //Yeah you think I'm just talking huh?// Chuck Wepner: It's hard to talk with a glove in your mouth Muhammad Ali: With a glove in my mouth// Chuck Wepner: //Yeah right Muhammad Ali: I'll put one right in your mouth just for that// Repetition occurs frequently between MLK and Antony's speech, as they try to make a point towards their motive. Antony uses abstract nouns such as 'honourable' and 'ambitious' to create an ironic force into the sentence, however it creates a sarcastic tone for the audience, questioning his integrity. MLK also uses abstract nouns such as 'freedom' and 'we' to produce a sense of unity and to encourage the audience that they will no longer be restrained to acts. His use of hyperbole stresses the urgency of the situation. He does this frequently. '...Millions of Negro slaves who had seared in the flames of withering injustice.' He cleverly uses a metaphor to describe the suffering of the slaves. ...read more.