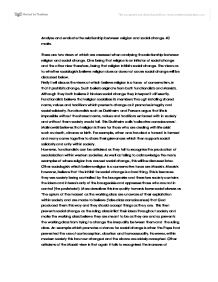 Assess and evaluate the relationship between religion and social change

Analyse and evaluate the relationship between religion and social change. 40 marks. There are two views at which are assessed when analysing the relationship between religion and social change. One being that religion is an initiator of social change and the other view therefore, being that religion inhibits social change. The views as to whether sociologists believe religion does or does not cause social change will be discussed below. Firstly I will discuss the views at which believe religion is a force of conservatism, in that it prohibits change. Such beliefs originate from both functionalists and Marxists. Although they both believe it hinders social change they interpret it differently. Functionalists believe that religion socializes its members through installing shared norms, values and traditions which prevents change as it promotes integrity and social solidarity. Functionalists such as Durkheim and Parsons argue that life is impossible without the shared norms, values and traditions enforced within society and without them society would fail. ...read more.

However, within modern society this has now changed and the above are widely accepted. Other criticisms of the Marxist view is that again it fails to recognised the increase of secularization and how religion can be used to oppose the ruling class, suggested for by Neo-Marxists. Neo-Marxists believe that religion does not always act as a conservative force. Yet, it can be seen to cause radical change. Promoting this idea is Otto Maduro. He found that priests began to revolt against the ideologies of the bourgeoisie and helped those who had been oppressed within society to help relieve their grievances. This happened particularly within Latin America in the Somoza regime. This then caused Christianity and Marxism to fuse together, which was known as the 'liberation theology'. Another sociologist who installs the idea that religion is a force for social change is Max Weber. Weber suggests that Calvinism (non-conformist Protestants) had caused the arising of capitalism through the protestant work ethic. ...read more.

Lastly, is the belief of social change through fundamentalism. Fundamentalism is the idea that the ideas within modern society are wrong and that previous ideas and traditional values of religion need to be reinstalled and returned to the way they believe it should be. This is a force for social change as it is predating the existence of religion. Yet, they want to prevent further change within modern society. To conclude, the ideologies both show how religion can be a force for social change, yet it can also prevent it. I believe that whether religion can change society or not very much depends on the values you believe. It is shown in the arguments outlined above that depending on which society you live in religion can be a factor as to whether it changes society or not. For example Marxists believe that the bourgeoisie reproduces the interests of their own and create a false class consciousness for those who are not powerful and prevent the working class from rebelling. However, in places such as Latin America, religion can be a cause for social change to help those being oppressed within society. ...read more.