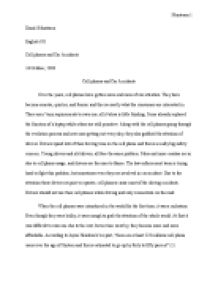 ﻿Munteanu Daniel Munteanu English 101 Cell phones and Car Accidents 24 October, 2010 Cell phones and Car Accidents Over the years, cell phones have gotten more and more of our attention. They have become smarter, quicker, and fancier and this is exactly what the consumers are interested in. There aren?t any requirements to own one; all it takes is little thinking. Some already replaced the function of a laptop while others are still primitive. Along with the cell phones going through the evolution process and new ones getting out every day, they also grabbed the attention of drivers. Drivers spend lots of their driving time on the cell phone and this is a really big safety concern. Young drivers and old drivers, all face the same problem. More and more crashes occur due to cell phone usage, and drivers are the ones to blame. The law enforcement team is trying hard to fight this problem, but sometimes even they are involved in car accident. Due to the attention these devices require to operate, cell phones cause most of the driving accidents. ...read more.

Driving schools often show tragic videos and officers are sent to schools to spread the message. Some get the message and take actions while others don?t care at all. David Strayer and Frank Drews completed a research to see the effects of cell phone use while driving. The results showed that the effects from cell phone use affected the driving performance on both young drivers and older drivers. They says that ?Compared with single-task (i.e., driving-only) conditions, when drivers used cell phones their reactions were 18% slower, their following distance was 12% greater, and they took 17% longer to recover the speed that was lost following braking?(640). Talking on the phone changes our reaction time significantly. We can say our brain multitasks, but driving and talking on the phone is more than multitasking. Our brain can handle it but it will focus on only one thing at a time, making our reaction time is slower. Most states have agreed to ban cell phone usage while driving, unless a hands-free device is used. Over the last few years, different hands-free gadgets were released that lets us talk on the phone and use both hands on the steering wheel. ...read more.

It delays reaction time and can cause loss of control over the vehicle. It only takes a moment for the accident to happen. There are other causes that lead to accidents and they might happen more often but this is big issue for all the drivers around the world. Texting while driving will cause damage to both parties when it ends up in an accident. Cell phones play a big role in our everyday lives and we are more and more dependent on them. Over the years, designers have tweaked them around and now they are much smaller and easier to use. Anyone at an age can use one and they are more affordable than ever. But they are a big traffic concern. When using the cell phone while driving, the reaction time is slower and that is enough to cause a traffic collision. Cell phone use is the leading cause of traffic accidents. I urge drivers not to use the cell phone while driving, whether it?s talking or texting. Using a cell phone puts the driver at risk of a collision. Any distraction while driving is dangerous, but cell phones have really crossed the line. So before using the cell phone while driving, think about it, it might be the last call. ...read more.