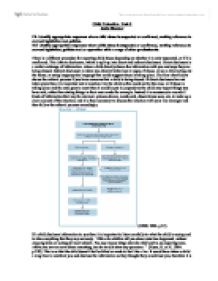 Child Protection- Task 3 Jodie Bloomer P4- Identify appropriate responses where child abuse is suspected or confirmed, making reference to current legislation and policies. M2- Justify appropriate responses where child abuse is suspected or confirmed, making reference to current legislation, policies and co-operation with a range of other professionals. There is a different procedure for reporting child abuse depending on whether it is only suspected, or if it is confirmed. This links to disclosure, which is split up into direct and indirect disclosure. Direct disclosure is a verbal exchange of information- when a child directly shares the information with you and says they are being abused. Indirect disclosure is when you observe behaviour or signs of abuse, or see a child acting out the abuse, or using inappropriate language that could suggest abuse is taking place. The flow chart below shows the referral process if you have concerns that a child is being abused. If direct disclosure has not taken place then it is important not to mention it to the child as this could not be the case, or if abuse is taking place and the case goes to court then it could be put in jeopardy as the child may repeat things you have said, rather than stating things in their own words for example. Instead it is necessary to record all kinds of information that may be relevant- pictures drawn, words said, observations seen, etc, to make up a clear account of the situation, and it is then necessary to discuss the situation with your line manager and then follow the referral process accordingly. ...read more.

This Act places a stronger duty on multi-disciplinary teams to work together to protect children these include local authorities, the police, early years workers, social services, the health service, and the youth justice system, etc. The Human Rights Act 1998 is linked to the implementation of no-smacking policies, etc, and the states that every child has the "right not to suffer ill treatment or cruel, unusual punishment." (Flynn, H. et Al. 2004. p.41). The Data Protection Act 1998 refers to child protection cases that professionals should only disclose information about a child on a need-to-know basis. For example if a child discloses to their teacher that they are being abused, then the teacher reports to the Child Protection officer of their manager, then it is not necessary that any other member of staff needs to know about the case at that time. As a result of the deaths of Jessica Chapman and Holly Wells in 2004 the Birchard Report was published and made recommendations about how information is shared and stored. All settings should have a child protection policy that incorporates information from many of the mentioned pieces of legislation and these should state who is the child protection officer in the setting, as well as detailing what action should be taken if you have concerns about a child in that specific setting. P6- Describe how an early years worker co-operates with a range of other agencies in cases of suspected or confirmed abuse. ...read more.

This is not the same as making allowances for the family; it is a case of supporting the family in the best way so that procedures can be carried out effectively. Another area that links to this is by agencies and professionals being aware of any religious dates or festivals that are important to the family, so that they can try to avoid visiting at these times if at all possible. It is also important not to assume that "parents from a particular background are more or less likely to abuse their children" than from any other parents. (Tassoni, P. 2006. p.95). Relating to this it is important not to assume that all parents who 'smack' their children are abusers, as many parents, and many cultures, use this as a form of discipline. This relates to Victoria Climbie's case as "assumptions were made about Caribbean methods of discipline, suggesting they were more authoritarian, and some of these assumptions led to Victoria being ignored by the authorities." (Tassoni, P. 2006. p.96). Also in Victoria's case it was assumed "that because her social worker was black she would have greater knowledge of Victoria's culture. This was, sadly, a grave misjudgement." (Flynn, H. et Al. 2004. p.21). In these circumstances and cases where professionals have concerns over a child's welfare, "the Human Rights Act 1998 stipulates the basis on which governments can intervene in family life." (Flynn, H. et Al. 2004. p.48). It is also important that all agencies and professionals involved in a child protection case have a level of knowledge about different ethnic minorities, in order to best protect the children. ...read more.