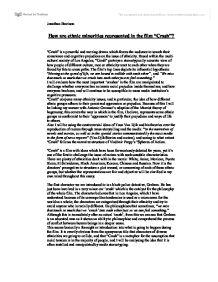 How are ethnic minorities represented in the film "Crash"? "Crash" is a powerful and moving drama which forces the audience to search their conscience and cognitive prejudices on the issue of ethnicity. Based within the multi-cultural society of Los Angeles, "Crash" portrays a stereotypically accurate view of how people of different culture, race or ethnicity react to each other when they are forced by fate to cross paths. The film's tag-lines depicts its influential hypothesis: "Moving at the speed of life, we are bound to collide with each other", and "We miss that touch so much that we crash into each other just to feel something." I will evaluate how the most important 'crashes' in the film are manipulated to challenge whether everyone has an innate racial prejudice inside themselves, and how everyone has been, and will continue to be susceptible to mass media institution's cognitive pressures. "Crash" conjures many ethnicity issues, and in particular, the idea of how different ethnic groups adhere to their perceived oppression or prejudice. Because of this I will be linking my answer with Antonio Gramsci's adaption of the Marxist theory of hegemony; this covers the way in which in the film, I believe, represents some ethnic groups as conformist to their 'oppressors' to justify their prejudices and ways of life to others. Also I will be using the controversial ideas of Teun Van Djik and his theories over the reproduction of racism through mass storytelling and the media: "in the narratives of novels and movies, as well as in the special stories communicated by the mass media in the form of news reports" (Van Djik Stories and racism), and seeing to what extent "Crash" follows the narrative structure of Vladimir Propp's "Spheres of Action. "Crash" is a film with ideas which have been fervourlessly debated for years, yet it's one of the first to challenge the issue of racism with such unsubtle characteristics. ...read more.

I am of the opinion that if a film such as crash becomes so mainstream as to win an Academy Award, then much of the political weaponry is lost on a cognitive audience. This in turn leaves many of their representations open for some to believe they're accurate, and thus ending up with a movie which I believe is not always necessarily understood. I am also a firm believer of the Marxist hypothesis that we have only the ability to think in media stereotypes and objects are only ever seen in the manipulated state of the intensified and intensifiers. Because of this I believe that producers will never create a film without prejudice or stereotype because there is no other way of thinking or producing characters than through media-tinted spectacles. Cameron is a successful television producer, which has gone someway to promoting him into American middle-classdom. Whilst at work on his show, still mulling over what it means to be black, he is called over by one of his superiors, a white man. The man explains that he has noticed one of Cameron's characters sounding "less black" on camera, merely by correcting the inaccurate syntax and pronunciation of a sentence. Cameron tries to rubbish it by questioning it's relevance on whether the character is black or not, for everyone can see what he looks like. The man however subtly authorises he change it to a version an audience will more easily understand as 'black', and this is the moment Cameron realises that even his mainstream organisation is racist, and to the nodding agreement of Van Djik, their influential medium is inflicting cognitive prejudices and racial stereotypes onto a mass audience. This is clever as the producers seem to even microcosm the large organisation of 'Hollywood' into the smaller capacity of a television programme to portray the idea that visual media enforces black stereotypes. Later in the film Cameron 'crashes' into two young, black car thieves, Anthony and Peter. ...read more.

Although a rather fervourless and pessimistic view, it agrees with Van Djik's hypothesis that mass media will continue to fuel racism through storytelling, and also with the Marxist Hegemonic theory that ethnic minorities will continue to conform to their oppressors through the influence of the media. For a drama, I believe "Crash" ultimately fulfils generic expectations with its gritty storyline and rounded characters, but because of its racial ethos, and multi-lined character 'crashes', it moves to almost a documentary style, with the storyline debating how people react to ethnicity in real life. This makes the film seem more believable, and that the racial confrontations, to a passive audience, will appear realistic. I believe that "Crash" is a film which has been mistaken or misunderstood as a film which attempts to combat racism. After reading many heated reviews it seems many people are of the opinion that the stereotyping of characters is nothing more than manipulation similar to blaxploitation films, and that "Crash" is in fact full of unneeded and even cognitive racism. I myself think this is erroneous and mis-interpretative. I believe "Crash" has to cast stereotypes or else the characters themselves would not in fact be representations but be merely 'personalities', it is impossible to have a film without representations, if only because the audience will have a certain stereotype at the ready the moment they see a character's race. I think "Crash" is not a movie trying to defeat racism, but one to help inform its audience that we all have racial prejudices that are innate and immovable, and uses easily noticeable representations of ethnicity to show that neither are necessarily, in today's cosmopolitan world, more to blame than others. I don't though acclaim "Crash" for accurately representing all ethnicities, I believe they are unfair on the Persian representation by not allowing Farhad to have a non-racist side (he did shoot Daniel after all), and using the daughter as a block character; and also by concentrating so much on ethical representations, "Crash" seems to be unfair on women by using them as tools in the ongoing stereotypical 'race war'. ...read more.