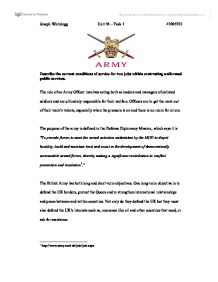 Describe the current conditions of service for two jobs within contrasting uniformed public services. The role of an Army Officer involves acting both as leaders and managers of enlisted soldiers and are ultimately responsible for their welfare. Officers are to get the most out of their team's talents, especially when the pressure is on and there is no room for errors. The purpose of the army is defined in the Defense Diplomacy Mission, which says it is "To provide forces to meet the varied activities undertaken by the MOD to dispel hostility, build and maintain trust and assist in the development of democratically accountable armed forces, thereby making a significant contribution to conflict prevention and resolution1." The British Army has both long and short-term objectives. One long-term objective is to defend the UK borders, protect the Queen and to strengthen international relationships and peace between and within countries. Not only do they defend the UK but they must also defend the UK's interests such as, recourses like oil and other countries that need, or ask for assistance. Depending on whether you would like to join the army as an undergraduate and acquire a sponsorship through university the salaries are as follows: RANK ON APPOINTMENT RISING TO* Gap Year Commission (GYC)/ Undergraduate Army Placement (UGAP) ...read more.

Shift Patterns - The Army does not necessarily have shift patterns but if you are on duty for whatever reasons you will be expected to work unsociable hours, particularly when on tour. Contracted Hours - In the army you're contracted to twenty four hours a day, seven days a week, and three hundred and fifty two days a year. You get paid for that time and your time is the army's time. Access to Training and Education - Most camps in the army have learning centers where you can find information on further or higher education including university degrees, and national vocational qualifications. Grants are available to cover the cost of any course fees involved. The army is a training environment and you never stop learning. Conditions of the police service There are many conditions in which police will have to work. When on the beat with or without a car they must work in all whether conditions while still working effectively. It is always unknown what a police officer may have to face. Salary - When you join the police force you will under-go your initial training. After passing your training and a two year probation your pay will increase, as it will do when you get promoted. ...read more.

Postings - Constables have to work where in the area where the force they have joined is. No preferential treatment is given to anyone so they can be closer to home. Shift Patterns and Hours - The normal working week is 40 hours on a shift basis. Shift patterns vary between forces. All ranks below superintendent are entitled to two rest days a week and compensation if required to work over those two days. They are also entitled to leave or compensation in lieu of public holidays. The police force also allows part time working. As a general rule, the same terms and conditions should apply to part-time officers as they apply to full-time officers, where appropriate on a pro rata basis. You can apply to join the police service as a part-time officer but whilst on probation you must work an average of at least 24 hours a week (1,248 hours a year). Initial training must be completed on a full-time basis. Officers working part-time will not be exempt from working shifts - including night duties. The annual salary of a part-time (or job sharing) probationer, constable or sergeant is that of a full-time officer calculated on a pro rata basis. Access To Training and Further Education - The Police Force offers information once you have joined on training and further education. ...read more.