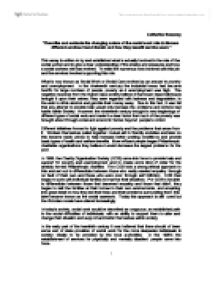 Describe and evaluate the changing nature of the social work role &amp; discuss different services found therein and how they benefit service users

Catherine Sweeney "Describe and evaluate the changing nature of the social work role & discuss different services found therein and how they benefit service users" This essay is written to try and established what is actually involved in the role of the social worker and to give a clear understanding of the strains and pressures and how a social workers role has evolved. To enlist the numerous Acts involved with this job and the services involved supporting this role. What is now known as Social Work or Social Care evolved as an answer to poverty and unemployment. In the nineteenth century the industrial towns had became horrific for large numbers of people, poverty and unemployment was high. The negative response from the higher class society believed that lower class individuals brought it upon their selves; they were regarded with laziness and degradation, in the wish to drink alcohol and gamble their money away. Due to this fact, it was felt that any attempt to provide help would only increase the problems and enforce bad habits within Society. However, the nineteenth century brought in new beginnings of different types of social work and made it a clear factor that much of the poverty was brought about through social and economic factors beyond people's control. ...read more.

The London School of Economics were the first to sanction the first generic Social Work Course in 1954. The Seebohm Committee was set up in 1965 resulting in the structure of social services which predominately exists today. Resulting from this, the different components of social services was uniformed into one system run by the local authorities, from this the "Local Authority Social Services Act" came into force in 1970. As a result of these changes the decision was made that Social Workers were now generically trained, meaning they were not trained in one specialist area, but trained in all areas of social work and having the capability to deal with a range of different areas and provide a variety of support for service users. The main tasks for social workers includes a variety of roles such as case management (networking clients with external agencies and programmes that meet their needs e.g. rehabilitation); medical social work; counselling; caseworker; care manager; agent of social control; social welfare; community organising; advocacy; teaching and social science research. Social workers also work in a variety of settings including: non-profit, public social service agencies, private, advocacies, hospitals, local authority, hospices, schools, charitable and voluntary, the lists are endless. There is still no clear definition of a Social Worker; a Social Worker undertakes so many different roles that over the years this has become an increasing problem for them to undertake their positions. ...read more.

Local authority job cutbacks will be evident; the struggle is to be unknown. Social workers, as we have listed, have a number of tasks to undertake, more often than not in very difficult situations. They are there to support people with problems that they are unable to deal with themselves. It is important to remember though that no only is there many different activities and tasks to be carried out; that there are the ways in which they should be carried out but also the fact that what is being done! Word Count - 1,492 Referencing Adams, R., Dominelli, L., and Payne, M., (2002). Social Work: Themes, Issues and Critical Debates. Second Edition. Hampshire: Palgrave. BBC News. (2003). UK. BBC, Available from: http://news.bbc.co.uk/1/hi/uk/2062590.stm [Accessed 10th November 2006]. Chief Secretary to the Treasury., (2003). Every Child Matters. Norwich, The TSO (The Stationery Office). Available from: http://www.everychildmatters.gov.uk/_files/EBE7EEAC90382663E0D5BBF24C99A7AC.pdf [Accessed 5th November 2008]. Children & Young People Now. (2008). Analysis: Credit Crunch - Children's services face up to an uncertain future. UK, Children & Young People Now. Available from: http://www.cypnow.co.uk/inDepth/ByDiscipline/Careers/855588/Analysis-Credit-Crunch---Childrens-services-face-uncertain-future/ [Accessed 5th November 2008] Thomas, M., Pierson, J., (2006). Collins internet-linked dictionary of Social Work. Reset Edition. Glasgow: HarperCollins Publishers. Moore, S., (2002). Social Welfare Alive. Third Edition. Cheltenham: Nelson Thornes Ltd. Timesonline. (2002). The Times. London, News International Ltd. Available from: http://www.timesonline.co.uk/tol/news/uk/article828465.ece [Accessed 15th October 2008]. Wickipedia. (2008). Wikimedia Foundation, Inc. US. Available from: http://en.wikipedia.org/wiki/Social_work [Accessed 4th November 2008]. ?? ?? ?? ?? 1 ...read more.