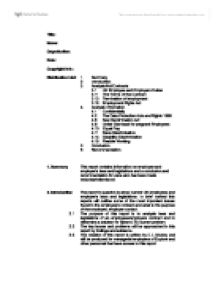 employee and employer's laws and legislations

Title: Name: Organisation: Date: Copyright Info: Distribution List: 1. Summary 2. Introduction 3. Analysis/Act/Contracts 3.1 UK Employee and Employers Duties 3.11 The Terms of the Contract 3.13 Termination of employment 3.18 Employment Rights Act 4. Analysis Information 4.1 Confidentially 4.2 The Data Protection Acts and Rights 1998 4.6 Sex Discrimination Act 4.9 Unfair Dismissal for pregnant Employees 4.10 Equal Pay 4.11 Race Discrimination 4.14 Disability Discrimination 4.18 Flexible Working 5. Conclusion 6. Recommendation 1. Summary This report contains information on employee and employer's laws and legislations and a conclusion and recommendation for Jane who has been made redundant/dismissed. 2. Introduction The report in question is about current UK employees and employer's laws and legislations. In brief context this reports will outline some of the most important issues found in the employee's contract and what is the purpose of the employee, employer contact. 2.1 The purpose of this report is to analysis laws and legislations of an employees/employers contract and to determine a solution for Xplore LTD current problem. 2.2 The key issues and problems will be approached in this report by findings and evidence. 2.3 The creation of this report is written by C L Mulvey and will be produced for managerial employers of Explore and other personnel that have access to this report. 3. Analysis/Act/Contracts UK Employee and Employers Duties The following are current UK laws for an employee duty to their employer: 3.1 The duty to serve or to provide the personal services agreed under the contract 3.2 The duty to exercise due to competence and skill in the exercise of duties 3.3 The duty to exercise care in the performance of the duties 3.4 The duty of loyalty 3.5 The duty to obey lawful and reasonable instructions The following are UK duties that the employer has to their employees: 3.6 The duty to pay wages and associated benefits 3.7 The duty to provide work 3.8 The duty to indemnify 3.9 The duty to ensure safety 3.10 To provide a safe ...read more.

It would be wrong to leave personal data open to be viewed by just anyone. 8. The files may not be transferred outside of the European Economic Area (that's the EU plus some small European countries) unless the country that the data is being sent to has a suitable data protection law. This part of the Act has led to some countries passing similar laws to allow computer centres to be located in their area. 4.5.3 For Jane's argument Partial exemptions: Some personal data has partial exemption from the rules of the Act. The main examples of this are: A data subject has no right to see information stored about him if it is to do with his/her health. This allows doctors to keep information from patients if they think it is in their best interests. Sex Discrimination Act 4.6 Sex discrimination on grounds of an individual's gender, material statue is prohibited in recruitment and employment. However under SDA s7, sex discrimination may be allowed if the employment vacancy does require a specific gender to assist in the job for example in certain army position women are unable to join for specific reason and the same applies to some male cases 4.7 In context there are two forms or discrimination Direct and indirect. Direct discrimination occurs when a person is treated less favourably than another person of the opposite sex. Indirect is when a particular requirement is needed and that requirements causes indirect discrimination 4.8 When advertising for a job the employer must realise that they can not discriminate against men or women through advertising, for example a company can not advertise that they require a waiter as that term means they are discriminating against waitresses, the advertisement must advertise "waiter/waitress needed". Automatic Unfair Dismissal for pregnant Employees 4.9 It is unlawful to dismiss an employee on the grounds of them being pregnant; this is also classed as sex discrimination Equal Pay 4.10 Due to the equal pay act 1970 men and woman are ...read more.

has been made redundant on the fact that she is unable to work in the current condition at work, but if the medical report states otherwise then Jane has been unfairly dismissed on the basis of her pregnancy. If Jane seek legal advice because she feels she has been unfairly dismissed then this case would go to a tribunal because tribunals deal with work related incidents and legal problems. 6. Recommendation I would advise you to make sure that you have based Jane's redundancy on the medical report and nothing else as it could cause sieve problems in the future. If Jane does seek legal advice and this case does go to a tribunal I would recommend gathering relevant evidence and information. But its easier if you could settle this situation out of court, this might mean explaining more in dept the reason for Jane's redundancy and even considering whether she might be able to return to work when she has overcome her post natal depression. 7. Evaluation The data protection act and sex discrimination act is their to protect Jane and her rights and to enforce this legislation on the business selected, It important that theses two acts protect Jane because the data protection act will protect her because she will be able access her medical record so she will be able to determine what the real reason for her redundancy is whether its medical or due to the fact of her absenteeism. The sex discrimination act protect Jane because by law a company cannot discriminate against a persons gender in Jane's case it's the fact that she has post natal depression and medically a man cannot get post natal depression so in term the company in question is discriminating against Jane because she is a woman and she is suffering from a female depression. Its important for theses laws to protect Jane and other people because with out theses laws employees would have not rights and have problems in the work force. ...read more.