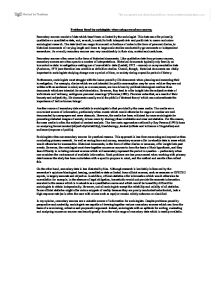 Examine problems faced by sociologists when using secondary sources in their research.

Problems faced by sociologists when using secondary sources. Secondary sources consist of data which hasn't been collected by the sociologist. This data can offer primarily qualitative or quantitative data, and, as such, is useful to both interpretivists and positivists in macro and micro sociological research. The data itself can range from small collections of notes in the form of personal diaries, to historical documents of varying length and focus to large-scale studies conducted by governments or independent researchers. As a result, secondary sources can vary considerably in their size, content and usefulness. Secondary sources often come in the form of historical documents. Like qualitative data from primary sources, secondary sources are often open to a number of interpretations. Historical documents typically rely heavily on inconclusive data: investigations making use of unavailable data (Laslett, 1972 - census) or unrepresentative data (Anderson, 1971) ...read more.

Another source of secondary data available to sociologists is that provided by the mass media. The media are a convenient source of information, particularly when events which would otherwise be vague or unclear are well documented by newspapers and news channels. However, the media has been criticised by some sociologists for promoting distorted images of society, driven more by ideology than irrefutable and clear cut statistics. For this reason, the mass media is often the subject of content analysis. The four main approaches outlined by Ray Pawson (1995) focus on analysing formal content (objectivity/reliability), bias/ideology, textual (effects and influence of linguistics) and audience (response of public). Sociologists often use secondary sources for practical reasons. This approach is less time consuming and expensive than conducting primary research. ...read more.

in the absence of legal obligation, households would not provide the accurate information recorded in the census which is invaluable as a quantitative source and which would be incredibly difficult for sociologists to obtain independently. However, not all sociologists accept the reliability and validity of all statistics. Some official statistics might offer untrue snippets of reality because they are poorly conducted/underfunded, lack a high response rate (as is often the case with crimes such as rape) or remain widely unknown or classified. In my opinion, secondary sources are a valuable source of information for sociologists. Despite problems posed by perspective and neutrality, sociologists are capable of drawing together various secondary sources which can form the basis of a convincing, cohesive and purposeful argument. Indeed, sociologists with an aptitude for sorting, evaluating and analysing numerous sources can benefit greatly from the wide range of secondary data which is readily available. ...read more.