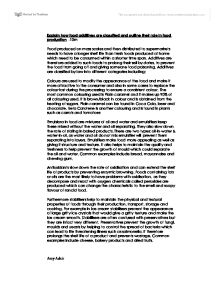 Explain how food additives are classified and outline their role in food production -10m Food produced on mass scales and then distributed to supermarkets needs to have a longer shelf life than fresh foods produced at home which need to be consumed within a shorter time span. Additives are therefore added to such foods to prolong their sell by dates, to prevent the food from going off and giving someone food poisoning. Additives are classified by law into different categories including: Colours are used to modify the appearance of the food and make it more attractive to the consumer and also in some cases to replace the colour lost during the processing to ensure a consistent colour. ...read more.

They also slow down the rate of staling in baked products. There are two types: oil-in-water & water-in-oil, as water and oil do not mix emulsifier will prevent them separating into layers. Emulsifiers make food more appealing as well as giving it structure and texture. It also helps to maintain the quality and freshness to help prevent the growth of mould which could separate the oil and water. Common examples include bread, mayonnaise and chewing gum. Antioxidants slow down the rate of oxidisation and can extend the shelf life of products by preventing enzymic browning. Foods containing fats or oils are the most likely to have problems with oxidisation, as they decompose and react with oxygen chemicals called peroxides are produced which can change the characteristic to the smell and soapy flavour of rancid food. ...read more.

Stabillisers are often confused with preservatives but they are infact very different. Preservatives prevent the growth of fungi, moulds and yeasts by helping to control the spread of bacteria which can lead to life threatening illness such as salmonella. It therefore prolongs the shelf life of a product and prevents wastage. Common examples include cheese, bakery products and dried fruits. Other less commonly known additives are also used readily and include acids, buffers and bases to control or adjust the PH of food. Firming and crisping agents are also used to prevent the loss of moisture and the texture of canned fruits and vegetables. Furthermore nutrient additives are used to enhance the nutrient value of food or reduce nutrients during processing. ?? ?? ?? ?? Amy Adair ...read more.