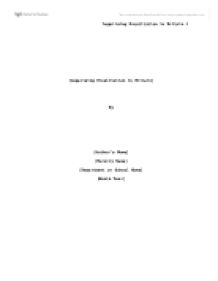 [Legalising Prostitution in Britain] By [Author's Name] [Faculty Name] [Department or School Name] [Month Year] Acknowledgement I would first like to express my gratitude for my research supervisor, colleagues, peers and family whose immense and constant support has been a source of continuous guidance and inspiration. DECLARATION I [type your full first names & surname here], declare that the following dissertation/thesis and its entire content has been an individual, unaided effort and has not been submitted or published before. Furthermore, it reflects my opinion and take on the topic and is does not represent the opinion of the University. Signature: Dated: ABSTRACT In this study we try to explore the concept of Prostitution in a holistic context. The main focus of the research is on legalizing prostitution and its relation with the society of Britain. The research also analyzes many aspects of Prostitution and tries to gauge its advantages and disadvantages. Finally the research describes various factors whether to legalise prostitution or not. TABLE OF CONTENTS ACKNOWLEDGEMENT II DECLARATION III ABSTRACT IV CHAPTER 1: INTRODUCTION 1 Background of the Study 1 Problem Statement 1 Research Aims and Objectives 2 Significance of the Study 2 Research Questions 2 Reliability and Validity 3 Generalizability 4 Ethical Considerations 5 CHAPTER 2: LITERATURE REVIEW 6 Prostitution 6 Prostitution in History 7 Prostitution Today 10 Prostitution: A Violation of Human Rights of Women 13 Prostitution in Other Countries 15 Issues of Decriminalisation and Legalisation of Prostitution 18 CHAPTER 3: METHODOLOGY 21 Research Design 21 Literature Search 22 CHAPTER 4: DISCUSSION AND ANALYSIS 23 Defining Decriminalisation and Legalisation of Prostitution 23 Prostitutes' Rights Organisations 24 The Costs of Illegal Prostitution 27 Legal Prostitution and HIV/Aids 28 Feminist Opposition 30 The Realities of Prostitution 31 The Dark Side of Legal Brothels 34 CHAPTER 5: CONCLUSION 36 Pros of Legalising Prostitution 36 Cons of Legalising Prostitution 38 REFERENCES 42 CHAPTER 1: INTRODUCTION Background of the Study Popularly called "the world's oldest profession", prostitution is morally disapproved in almost all societies, given that the degradation is for people who practice it. ...read more.

Most people agree that prostitution will continue to exist in one capacity or another, whether it is illegal or not. Proponents and opponents of legal prostitution disagree on whether this would be in the best interests of the females (and males) who sell sexual favours, as well as in the best interests of society itself, in the United States, the debate has picked up steam in recent years as prostitution activists and organisations fight for rights and sexual privacy while anti-prostitution forces are quick to point out the negative factors associated with the sex trade industry. With the complexities on both sides, the issue will continue to be fought over, with no clear-cut winner, well into the twenty-first century. (Robinson 2006 48) Intrinsic Violence Trying to present prostitution as an occupation that is placed under the control of health and safety standards ignores the intrinsic violence of prostitution and the fact that sexual harassment and rape are indistinguishable from the product customers buy. Moreover, legalisation itself has introduced a new series of harmful consequences for women. Among these is, ironically, a major expansion of the illegal side of prostitution. In fact, the phenomenon of street prostitution, far from disappearing with legalisation, has continued to grow in Victoria. Moreover, legalisation, far from removing the influence of organized crime, has, however, more standing the role of illegality by introducing greater economic incentives for trafficking women and girls for both legal and illegal brothels. Sullivan also quoted experts in organized crime who argue that the legalized prostitution industry in Victoria still has strong ties to the criminal underground. With respect to this human trafficking, Sullivan turns attention to international studies that put billions benefits of this modern form of slavery. Estimates of the number of women and girls who are trafficked are the 700,000 to 2 million each year. The legalisation of prostitution has done nothing to reduce sex trafficking. ...read more.

Our country is the best example of how, today continues to grow that traffic, but harming the rights and freedoms of persons involved. 3. Legalisation does not control the sex industry Complete control, of course not. The regularisation of migrant workers does not imply total control of illegal immigration, but no doubt that the control is much greater in a situation legal. If the control is a value, legalisation is the most effective way to maximize this value. Much more, of course, that the banning or tolerance. 4. Legalising prostitution is increasing in the street illegal This is absolutely false. Now all prostitution is illegal and no one instrument to fight against it and against the use of the street. Therefore, for very low percentage to enter into the legal quota, it would be greater than at present, where one hundred percent of prostitution is illegal. 5. Legalisation will not increase choice for women If the current situation of illegal and unregulated extortion and coercion reaches its highest degree, it is impossible that legalisation does not increase the choice. If this is true of any social relationship sensitive and vulnerable (matrimonial, administrative), why not be valid also for the sex trade. Legalisation is the only framework that allows for some margin of choice for women and men in prostitution. And some say that in an unequal and unjust society, wage labour, and heteronymous expensive is only very relatively free. But this is applicable to multiple forms of wage employment, and even institutions like marriage. 6. The legalisation of prostitution does not eliminate exploitation The concept of "exploitation" has many different definitions. One is the one which combines all forms of exploitation of wage labour, based on private ownership of means of production and the domination of capital over labour, through the work of surpluses. From this perspective, there is no doubt that legalisation does not end up working, but it gives us more and better tools to combat it. Legalisation reduces drastically the risk of situations of exploitation in prostitution. ...read more.