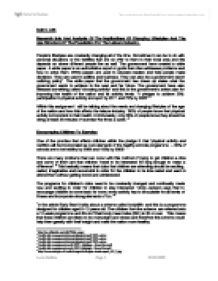 Unit 5- A03 Research Into And Analysis Of The Implications Of Changing Lifestyles And The Age Structure Of The Population For The Leisure Industry. People's lifestyles are constantly changing all of the time. Sometimes it can be to do with personal situations or the facilities that are on offer to them in their local area and this depends on where different people live as well. The government have created a white paper. A white paper is an authoritative report or guide that often addresses problems and how to solve them. White papers are used to educate readers and help people make decisions. They are used in politics and business. They can also be a government report outlining policy1. The white paper that the government has drawn up states what the government wants to achieve in the near and far future. The government have also released something called "choosing activity" and this is the government's action plan for improving the health of the nation and its activity levels. 'It pledges to achieve 50% participation in physical activity and sport by 2011 and 70% by 2020'2. Within this assignment I will be talking about the needs and changing lifestyles of the age of the nation and how this affects the leisure industry. '95% of people know that physical activity is important to their health. Unfortunately, only 28% of people know they should be doing at least 30 minutes of exercise five times a week.'3 Encouraging Children To Exercise One of the promise that affects children within the pledge it that 'physical activity and nutrition will be incorporated as core elements of the healthy schools programme - 50% of schools are to be healthy by 2006 and 100% by 2009.' 4 There are many problems that can occur with this method of trying to get children active and some of them are that children "need to be interested for long enough to make a difference".5 This basically means that clubs that children are attending should be ...read more.

They are still able to gain muscle strength. It is a fact that 4 out of 10 people over 50 take no exercise at all.15 95% of people know that physical activity is good for them but they do nothing about it and this is very worrying considering that it is their life that they are affecting, but only 28% of the population are doing something about it and taking part in activities and are doing at least 30 minutes of exercise per day and most of the people doing this are older. Scientists did experiments and found that the hearts of male athletes between the ages of 50 and 70 were as powerful as those of 20 year old sedentary individuals. Cable explains that "in terms of the aging process, they may be chronologically old but biologically they have internal function of a 20 year old person and their everyday functional capacity is far superior to their peers."' 16 The results of the experiment show that there should be no reason for elderly people to not be taking part in some form of physical activity because it can still be a great benefit to these people even though they are more elderly. In the news recently there has been talk about the pensioners' playground and it is the first if its kind that we have in this country. 'The �15,000 outdoor facility in Blackley, Greater Manchester features six pieces of fitness equipment designed specifically to provide gentle exercise for the over-60s.'17 It is a place designed for multiple purpose. Obviously the main one is to help elderly people to exercise with more ease but it also gives them the chance to meet other people in their area and get them out and about. Many of the residents that have used the new playground say that it has brought back a youthful feeling and is now providing them with something to do in the community. ...read more.