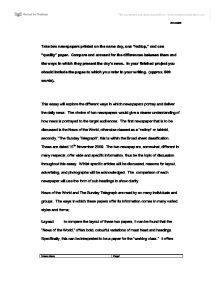 Take two newspapers printed on the same day, one "redtop," and one "quality" paper. Compare and account for the differences between them and the ways in which they present the day's news. In your finished project you should include the pages to which you refer in your writing. (approx. 800 words). This essay will explore the different ways in which newspapers portray and deliver the daily news. The choice of two newspapers would give a clearer understanding of how news is portrayed to the target audiences. The first newspaper that is to be discussed is the News of the World, otherwise classed as a "redtop" or tabloid, secondly, "The Sunday Telegraph"; this is within the Broad sheet classification. These are dated 15th November 2009. The two newspapers, somewhat, different in many respects, offer wide and specific information, thus be the topic of discussion throughout this essay. Whilst specific articles will be discussed, reasons for layout, advertising, and photographs will be acknowledged. The comparison of each newspaper will use the form of sub headings to show clarity. News of the World and The Sunday Telegraph are read by so many individuals and groups. The ways in which these papers offer its information comes in many varied styles and forms; Layout to compare the layout ...read more.

The use of language in papers is apparent when colloquial terms are used, as in the tabloid; broadsheet has a wider usage of vocabulary. The text is bold and in capitals within the tabloid and broadsheet much more of a traditional and formal approach. In conclusion, I am drawn to the fact that, the tabloid offers a more short and concise version of events, offering larger and a multitude of images; contributing to the target audience or the working class audience, the position of the article is more toward the centre of the paper and use of language to be more relaxed, using slang and limited vocabulary this being a more human interest led paper. Finally, the broadsheet offers more in depth, factual approach in relaying the news, offering minimum images to enhance the reading that is required of a more traditional paper. A wider choice of vocabulary is used, again suggesting that the paper is for the more professional or higher classed group of readers. These two articles also showed different accounts to the story; stating "5 die" and "4 die"; this also shows that tabloid and broadsheet newspapers can offer inaccurate information. ...read more.

The coverage of the incident was breaking and serious news that ultimately affecting the global economy bringing political outrage, community conflicts and ultimately war. The media is still reporting on large stories such like this example. This story effected people in many ways; anger, hatred, remorse, regrets and also silence and still now death continues. The mass media are important factors of socialization; they offer social norms, beliefs, and values. Looking back in history over twenty years ago, gender was an issue whether relating to mothers being at home and the father at work or female judges and male nurses. Equality has finally come in to fruition with the aid of the mass media. On reflection and conclusion to define media, this can be interpreted as various means or methods of communication, such as television, radio and the newspapers this can also suggest different news reporting agencies. The ability of identifying different media forms is paramount in the assumption on how the media has influence on modern society today. Specifically, target audience represents all walks of life, but again it is apparent that the reach to all persons can be uneven due to social and economic factors. Ultimately the media can impact and influence people's lives whether good or bad. ?? ?? ?? ?? 20403968 Simon Roch Page1 ...read more.