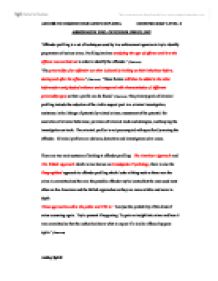 'Offender profiling is a set of techniques used by law enforcement agencies to try to identify perpetrators of serious crime. Profiling involves analysing the type of offence and how the offence was carried out in order to identify the offender.' (Class notes) 'The personality of an offender can then is found by looking at their behaviour before, during and after the offence.' (Class notes) 'These factors will then be added to the other information and physical evidence and compared with characteristics of different personality types so that a profile can be found.' (Class notes) The primary goals of criminal profiling include the reduction of the viable suspect pool in a criminal investigation, assistance in the linkage of potentially related crimes, assessment of the potential for escalation of criminal behaviour, provision of relevant leads and strategies, and keeping the investigation on track. The criminal profiler is not preoccupied with specifically naming the offender. Criminal profilers are advisors; detectives and investigators solve cases. There are two main systems of looking at offender profiling: The American Approach and The British Approach which is also known as Investigative Psychology, there is also the Geographical approach to offender profiling which looks at thing such as there area the crime is committed and the area the possible offender my be located but the ones used most often are the American and the British approaches as they are more reliable and more in-depth These approaches allow the police and FBI to: 'Analyse the probability of this kind of crime occurring again. Try to prevent it happening. To gain an insight into crime and how it was committed so that the authorities know what to expect if a similar offence happens again.' (Class notes) The American Method of profiling is a system created by the Federal Bureau of Investigation in the 1970's. It is used to detect and classify the major personality and behavioural characteristics of an individual based upon analysis of the crime or crimes the person committed also by ...read more.

In particular, the criticism targets the organised vs. disorganised dichotomy and its theoretical and empirical foundations and assumptions. This dichotomy has become a commonly cited and used classification of violent, serial offenders. The only available study that examines the reliability of the classification system involved the reading of a sexual-homicide case summary. In this study, interrater reliability was found to be between 51.7% and 92.6% this study, although dated, does provide limited support for the reliability of the FBI sexual-homicide classification system. However, this form of reliability contributes little to the usefulness of the offender profiling system if the classification is not effective. The FBI classification system is derived from a single interview-based research study with a small sample of apprehended serial killers who operated in North America. Another approach to profiling an offender is the British Approach which is also known as Investigative Psychology. This was pioneered by a British environmental psychologist called Dr. David Canter at the University of Liverpool. The process of investigative psychology attempts to introduce a scientific basis to previously subjective aspects of criminal detection, crime scene analysis, investigation, apprehension and prosecution of the offender. Rather than offering a comprehensive methodology, investigative psychology represents a collection of theories, hypotheses and results of studies of the history and patterns of behaviour as they relate to certain individual characteristics. Canter (1989) argues that crime is an interpersonal transaction, usually between the criminal and the victim, within a social context. To this extent, criminals are performing actions that are direct reflections of the sorts of transactions they have with other people in more normal circumstances. He believed that how a person commits as criminal act "will often reflect the everyday behaviour of the perpetrator and that from studying the evidence available at the crime scene for instance together with any other discernable patterns in the crime(s) it is possible to make certain assumptions about the person who committed the crime". ...read more.

The murder had no idea of cleaning the crime scene as finger prints were found in the entire crime scene this shows that he does not have any idea of how to get rid of the forensic evidence. On apprehension it was found that Richard Ramirez was the youngest of seven siblings with an overbearing domineering father who at a young age had forced him to join the army where he was unhappy and bullied. This was the start of his petty criminal career which leads him in to trouble the authorities on several occasions and spending time in prison. He was also a know drug addict using both marijuana and cocaine. His association with an older relative who had psychopathic tendencies who shared his shared gruesome pictures of rape and human torture with him this along with the drug use fuelled his frenzied anti-social behaviour leading to more horrific of his crimes. By the age of 18, Richard was a habitual drug user and chronic candy eater, resulting in tooth decay and extreme halitosis. He also became involved in Satan worshipping and his general poor appearance enhanced his satanic persona. Although initially confessing to the crimes he later retracted the confession and caused many major delays in his trial leading to last for over four years before being convicted of all his crimes and being sentenced to the death penalty. Up on being lead away from the court to begin his sentence he shouted out at the court: ''You don't understand me. You are not expected to. You are not capable. I am beyond your experience. I am beyond good and evil. I will be avenged. Lucifer dwells in all of us...I don't believe in the hypocritical, moralistic dogma of this so-called civilized society....You maggots make me sick! Hypocrites one and all...I don't need to hear all of society's rationalizations. I've heard them all before...legions of the night, night breed, repeat not the errors of the night prowler and show no mercy. ...read more.