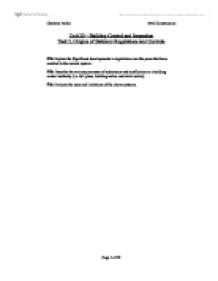 Origins of Statutory Regulations and Controls

Unit 20 - Building Control and Inspection Task 2, Origins of Statutory Regulations and Controls P2a Explain the Significant developments in legislation over the years that have resulted in the current system. P2b Describe the various processes of submission and notification to a building control authority (i.e. full plans, building notice and initial notice). P2c Evaluate the uses and limitations of the above systems. Town Hall Main Road Romford RM1 3BB United Kingdom Planning and the Building Regulations Booklet How did Building Control and the Building Regulations become Law? - 12th Century - London becomes first city to be granted Royal Charter entitling it to its own mayor and some form of self-government. This included byelaw's put in place for constructing of new buildings in the city originally to set standards for fire and safety precautions. As London grew these set standards of good building practice and town planning. - London Building Act 1667 - After the great fire of London destroyed 80% of the city Charles II proclaimed that any new buildings within the city would be of brick or stone and the streets wide enough so that fire could not spread from one side to the other. Christopher Wren was amongst others who was commissioned to draft regulations which became the London Building Act 1667 - these also accounted for structural load bearing walls, foundations, timber in party walls, beam bearings, joist centers, roof coverings and rainwater guttering and down pipes. From time to time new requirements were added to the London Building act and similar acts were introduced around Britain. - The Public Health Act 1875 - Was the first piece of countrywide legislation dealing with many aspects of building. Due to the outbreak of disease during the industrial revolution the government was forced to take action against bad sanitation, drainage & ventilation in new building requirements. - The Building Regulations 1965 - actually came into place in February 1966, this was the first form of modern legislation that covered the main part of England & Wales apart from Inner London Boroughs where the London Building Acts continued to prevail. ...read more.

- Conservation Area and Listed Building: As a general rule, the "thresholds" by which permission is required are far lower in Conservation Areas, and lower for Listed Buildings. Given that conducting unauthorised works to a Listed Building is a criminal offence, we strongly advise contacting us before commencing any works. Even cleaning a listed building can require permission if certain chemicals are to be used! Both of these application types attract no fee, and are often needed in addition to planning permission. If you are thinking of making one of these types of application, amongst the usual requirements for drawings etc we now also require a "Design and Access Statement". This document sets out the design principles and concepts that have been applied to the development - i.e. relating to the amount, layout, scale, landscaping and appearance of the development, and how the design of the development takes into account its context. For help reading, writing and using these new statements, use the links on the right. - Certificate of Lawfulness (CoL): There are two types of certificate; existing and proposed use or development. A CoL tests if the use or development of a building is lawful but can also be used to confirm that your proposal does not require permission. Existing - Although not compulsory a CoL (Existing) is the quickest way to test whether the use or activity continuing is lawful. * that operations which have been carried out are lawful (i.e. building works) * any failure to comply with a condition/limitation attached to a planning permission is lawful These applications are charged at the full planning fee, so as not to reward those who didn't apply for permission, before commencing works. Proposed - A CoL (proposed) may be applied for by anyone wishing to find out if; * any proposed use of buildings or other land is lawful or requires permission * the operation(s) ...read more.