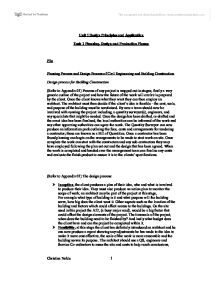 Planning, Design and Production Phases of the Construction Industry

Unit 1 Design Principles and Application Task 1 Planning, Design and Production Phases P1a Planning Process and Design Process of Civil Engineering and Building Construction Design process for Building Construction (Refer to Appendix 01) Process of any project is mapped out in stages; firstly a very generic outline of the project and how the future of the work will evolve is prepared by the client. Once the client knows what they want they can then employ an architect. The architect must then decide if the client's idea is feasible - the cost, scale, and purpose of the building must be scrutinised. By now a team should now be involved with running the project including, a quantity surveyor(s), engineers, and any specialists that might be needed. Once the design has been drafted, re-drafted and the exact idea has been finalised, the local authorities can be informed of the work and any other approving authorities can agree the work. The Quantity Surveyor can now produce an information pack outlining the fees, costs and arrangements for tendering a contractor; these are known as a Bill of Quantities. Once a contractor has been found planning can begin on the arrangements to be made to start work on site. Once complete the work can start with the contractors and any sub-contractors they may have employed following the plan set out and the design that has been agreed. When the work is completed and handed over the management team can finalise any costs and evaluate the finish product to ensure it is to the clients' specifications. (Refer to Appendix 01) The design process: > Inception; the client produces a plan of their idea, who and what is involved to produce their idea. They must also produce an action plan to monitor the scope of work, an architect may be part of the project at this stage, For example what type of building is it and what purpose will the building serve, how big does the client want it. ...read more.

The ground needs to be tested and soil testing would more than likely take place to check for contamination. From there the scope of work can be estimated but it cannot be measured accurately as it will change as the construction moves forward. P1b Compare and Contrast the Design Process for Building and Civil Engineering Projects The Building construction industry uses a Bill of Quantities to pay for their projects, the prices are worked out and listed before the work begins. Everything is accounted for from the cost of providing safety boots to the price of screws. The work can be paid either per day or a total amount can be agreed and paid on completion of each stage. As the client has a brief for the architect to adhere to the plan of work can be set out and followed exactly, minimising the risk of delays. The plan is set out very strategically allowing contractors to know where and how they should work, however the schedule can be tight and quite often cannot be changed. With Civil Engineering the work is priced using rates, and the contractors charge by the amount of work they have done rather that the amount of work there is to do as the work can vary and on some sites unpredictable. This is because they know the goal that has to be achieved; they are also working according to the brief set out by the client. However, the work has to be measured then re-measured as the construction progresses; this is mainly because the bulk of their section on the project is ground works, which is an unknown area to work within. Fundamentally the two divisions differ because building projects can be easily 'costed' with a carefully worked out schedule, where as civil engineering projects have a dead line to work to that is not entirely set in stone. ...read more.

P1D Compare the co-ordination management of each phase of the design and construction process With both sides of a development from Design to Construction, there is one major aspect that can damage the timeline and flow of the project and that is poor communication. With the Design team, if the architect does not convert the clients' ideas onto paper correctly the whole project is compromised from the very beginning. The Construction process follows a similar pattern - The Project Manager needs to know exactly what is expected from his team and sub-contactors, if this information is passed on incorrectly then the construction process could become a very costly mistake. So everyone is aware of the stages and what order they are to be completed in, it is important to have a works flow process. The same applies for the design team, they need to know who is in charge and what part of the project they are involved with, who do they report to and if there is problem who do they go to; To help with these questions usually an Organisational Flow Chart is sent out to all employees either by email or post. With the Construction side of the project, there is a similar process however it is much clearer who is in charge as they are usually on site every day and make them self known through an induction. Modern organisations no longer have the Architect as the person in charge, mainly because the structure of today's companies means the person in charge must not specialise in one subject. The Architects role has been demoted slightly as rather than employ lots of different company's and have lots of people in charge it is easier to have one contractor do all the work with one person in charge - this person being the Project Manager. The industry has had to evolve to meet the needs of ever demanding clients who want their project completed quickly and easily. ...read more.