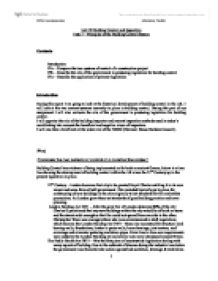 Principles of the Building Control System

Unit 20 Building Control and Inspection Task 1 - Principles of the Building Control System Contents Introduction P1a - Compare the two systems of control of a construction project P1b - Describe the role of the government in producing legislation for building control P1c - Describe the application of primary legislation Introduction During this report I am going to look at the historical development of building control in the UK. I will look at the two current systems currently in place in building control. During this part of my assignment I will also evaluate the role of the government in producing legislation for building control. I will appraise the role of the building inspector and current inspection methods used in today's world taking into account the beneficial and negative views of inspectors. I will also take a brief look at the wider role of the NHBC (National House Builders Council). P1a) Compare the two systems of control of a construction project Building Control has evidence of being implemented as far back as ancient Greece, below is a time line showing the development of building control within the UK since the 12th Century up to the present legislation in place. 12th Century - London becomes first city to be granted Royal Charter entitling it to its own mayor and some form of self-government. This included byelaw's put in place for constructing of new buildings in the city originally to set standards for fire and safety precautions. As London grew these set standards of good building practice and town planning. London Building Act 1667 - After the great fire of London destroyed 80% of the city Charles II proclaimed that any new buildings within the city would be of brick or stone and the streets wide enough so that fire could not spread from one side to the other. Christopher Wren was amongst others who was commissioned to draft regulations which became the London Building Act 1667 - these also accounted for structural load bearing walls, foundations, timber in party walls, beam bearings, joist centers, roof coverings and rainwater guttering and down pipes. ...read more.

Although the latter may have an equal desire to be helpful, their lack of 'hands-on' practice means they may be less able to devise solutions to the same problems. Nonetheless, a solution will probably exist, but it will invariably be down to you or your architect to identify it. The inspector's service is not free. The local authority will charge for the time given for advice, plan vetting and site inspections. It is wise, therefore, to discuss any proposed works on scheduled inspection dates, rather than contact them with different issues on different days. For example, at the pre-foundation stage you could consult the inspector on the type of damp-proof course recommended and any tips they might have on installation techniques. NHBC and their complete role: NHBC (National House Building Council) has many roles that it partakes within the new build sector of our industry and not only as building control inspectors for new build homes. The council employs over 350 building inspectors who work on behalf of and alongside many big construction companies or smaller house builders around the country, carrying out the role as the approved building inspector, checking plans and ensuring works are carried out according to building regulations issuing final certificates on completion. The NHBC has a consumer committee which is in place to look after what is best for homeowners they have regular meetings in which they discuss consumer affairs regarding new homes. They carry out consumer research. Most important of late is the NHBC's "your new home satisfaction survey" which was launched in April 2004 put in place to raise industry standards through improved customer service. 100'000 surveys will be sent to new home buyers each year giving them the opportunity to state the customer service level they were provided by their new home builder within the first year of moving in. One of NHBC kite mark services is providing "Buildmark", the most comprehensive warranty and insurance policy for new homes in the UK, offering up to 10 years warranty on most items/materials installed within new homes that hold "Buildmark". ...read more.

Extract Taken from http://www.planningportal.gov.uk For the work to be compliant, whether a new building is erected or an extension added, then the alterations must not make other fabric, services and fittings fail under the requirements. Conclusion Building Control and the use of local authority or approved building inspectors is very important in ensuring that new buildings and building works throughout the UK are completed to a standard which is reliable and will last the test of time. Hopefully this will help prevent the construction of dangerous or poor buildings that do not create a happy habitat for people to live in. The NHBC also holds a big role in ensuring new homes standards are what consumers expect for the ever rising and over inflated prices that we have to pay for our home. Hopefully they are as good at carrying out their role as what they promote sticking to their consumer charter and "Buildmark" 10 year warranty ensuring customers are looked after by developers and not left in the dark if defects do occur. The regulations set are lawful and the controls in place that enforce them have to be strict to ensure that the standards met remain at a high level. The procedures for following the regulations may seem arduous but the guidelines and free advice are of great importance; it gives people the confidence to build new structures or make alterations to improve their existing ones. With the introduction of green or sustainable construction further amendments will have to be made to the Building Act 1984, and possibly a new Act will have to be written to incorporate the social trends and the environmental issues today's developers are faced with. Lessons learnt in history have told us not to be complacent with construction, the building regulations are in place for a very good reason and though we might loathe the Building Control Inspector when he visits and undoes all the hard work, it is imperative that the work is done according to the requirements. ...read more.