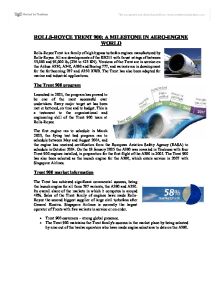 ROLLS-ROYCE TRENT 900: A MILESTONE IN AERO-ENGINE WORLD Rolls-Royce Trent is a family of high bypass turbofan engines manufactured by Rolls-Royce. All are developments of the RB211 with thrust ratings of between 53,000 and 95,000 lbf (236 to 423 KN). Versions of the Trent are in service on the Airbus A330, A340, A380 and Boeing 777, and variants are in development for the forthcoming 787 and A350 XWB. The Trent has also been adapted for marine and industrial applications. The Trent 900 program Launched in 2001, the program has proved to be one of the most successful ever undertaken. Every major target set has been met or bettered, on time and to budget. This is a testament to the organizational and engineering skill of the Trent 900 team at Rolls-Royce. The first engine ran to schedule in March 2003, the flying test bed program ran to schedule between May and August 2004, and the engine has received certification from the European Aviation Safety Agency (EASA) to schedule in October 2004. ...read more.

It is the world's cleanest high-thrust engine, with emissions well below all current and proposed legislations, generating only 40% of the CO2 per passenger kilometer of an average family car. Despite its size and power it is extremely quiet, meaning that the Airbus A380 has only around one third of the noise level of previous 150 seat aircraft. Trent 900 engine uses a 116-inch swept fan, a low NOx combustor and contra-rotating high-pressure systems which minimize emissions, noise and fuel consumption, making the Trent 900 the most environmentally friendly engine powering the Airbus A380. Engine EIS Power Applications Seats/ Payload Range (nm)* Trent 970 2007 70,000lb 311kN Airbus A380-800 525 8200 Trent 977 2009 76,500lb 340kN Airbus A380-800F 150 tons 5600 *Aircraft Manufacturer's Data Conclusion Engine is the powerhouse of every kind of aircraft and one of the most vital parts of it. It's very important to develop this with pace of time because in aviation nothing is stationary or constant. New technology is always welcomed to take the charge. Trent 900 engines is the product of Rolls-Royce Company which has been pioneered the engine technology by various means. Trent 900 is also an exceptional one which has already earned its place in the aviation world. ...read more.