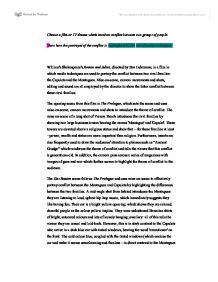 Show how the portrayal of conflict between the Montagues and Capulets in Baz Luhrmann's 'Romeo and Juliet' is highlighted by the use of media techniques.

Choose a film or TV drama which involves conflict between two groups of people. Show how the portrayal of the conflict is highlighted by the use of media techniques. William's Shakespeare's Romeo and Juliet, directed by Baz Luhrmann, is a film in which media techniques are used to portray the conflict between two rival families: the Capulets and the Montagues. Mise-en-scene, camera movements and shots, editing and sound are all employed by the director to show the bitter conflict between these rival families. The opening scene from this film is The Prologue, which sets the scene and uses mise-en-scene, camera movements and shots to introduce the theme of conflict. The mise-en-scene of a long shot of Verona Beach introduces the rival families by showing two large business towers bearing the names 'Montague' and 'Capulet'. These towers are elevated above a religious statue and show that - for these families at least - power, wealth and status are more important than religion. ...read more.

The cold colour blue, coupled with the tinted windows (which enclose the car and make it seems unwelcoming and faceless - in direct contrast to the Montagues open top) make the Capulets appear dangerous and uninviting. The word 'executioner' suggests they desire war, an idea that is furthered by the fact they dress in black and red colours. Their hair and persons are well groomed, showing that their appearance means a lot to them. The mise-en-scene of these shots displays the two families in direct contrast. While the viewer is not told of any specific reason for the conflict, it soon becomes apparent that they are very different and this helps to explain their extreme hatred of each other. Camera shots, angles, movements and editing also help to give an effective portrayal of the conflict in this scene. A low angle shot of Abra Capulet helps to make him appear confident, arrogant and powerful whilst mid-angle shots of the Montagues show them grouped together, which highlights their fear of the Capulets and of war. ...read more.

The conflict in this scene alludes heavily to 1950s spaghetti western films, using similar music to suggest this. Similarly, Tybalt sports cowboy-style boots and the Capulets handle their guns stylishly, suggesting that they see death and battle as an art. In conclusion, the reasons for the conflict between the Montagues and the Capulets are never fully explained in the film. However, the fact that the two families are very different to each other suggests that they will not see eye to eye. Furthermore, the one thing that they do have in common is that they are proud of power and status, which suggests that they are perhaps fighting for power, or notoriety. Inserts are used in The Prologue to introduce the theme of conflict; low angle shots are used in The Gas Station scene to show the Capulets as seeming powerful and in control whilst the Montagues are shown as frightened. Also, close ups help to show tension between the two groups of people, heightening the sense of conflict before it happens. Thus, media techniques are used to effectively highlight the conflict between the two families. Word count: 859 ...read more.