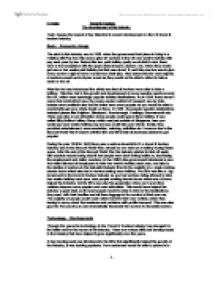 The developement of the Travel &amp; Tourism indutry

Task: Assess the impact of key historical & current development on the UK travel & tourism industry Socio - Economic change The start to the industry was in 1938 when the government had plans to bring in a Holiday with Pay Act; this was to give all workers in the UK one week's holiday with pay each year by law. Before this law, paid holiday pretty much didn't exist, there were a few exceptions with the upper class lawyers, doctors etc, where they would get one or two weeks paid holiday but that was about it, and this new law was to give every worker a right to have a break from their jobs. Also before this the vast majority of workers would work all year round as they would not be able to afford to take a week or two off. After the Act was introduced the effect was that all workers were able to take a holiday. This then led to the growth and development of many seaside resorts around the UK, which were seemingly popular holiday destinations. As in 1938 there weren't many that could afford cars, the most popular method of transport was by train, busses were available also but the trains were more popular as you would be able to comfortably get your whole family on them. In 1938, the popular seaside destinations included places like Brighton, Blackpool, Scarborough, Hastings, Bournemouth etc. There was also a new attraction where people could spend there holiday, it was called Billy Butlins Holiday Camp which was just outside of Skegness, here you would pay your weeks holiday pay and you could take your whole family, they provided entertainment, accommodation, catering, activities etc. However due to the Second World War it wasn't until the 50's and 60's that his business started to get popular. During the year 1935 to 1945 there was a serious downfall in the travel & tourism industry due to the Second World War, almost no one went on a holiday during these years. ...read more.

holidays a year, people had a lot more money to spend leading to the demand of more luxury holidays, city tourism also became much more popular e.g. people from the UK would go to Paris or Berlin and find it more exciting than visiting the same seaside resorts each year. The worst years for Britain in the decline of the seaside resorts was the 80's and 90's, these years you could argue was the start of long haul tourism, when people started to go places like Australia, USA, Caribbean etc. Places like Florida were developed and quickly became a favourite destination for families, mainly as they had some of the biggest attraction in the world, like Disneyland and many other theme parks. The Package Holiday Vladimir Reitz developed the package holiday back in 1950, he put together the first mass holiday abroad with flights from Gatwick airport to Corsica. This was a big development for the industry as it was something that the people of the UK had never seen before; virtually nobody had flown to a different country for their holiday. It was also the start to what now is massively popular, with the majority of people going on holiday with all the accommodation, flights, ancillary services put into one. However it wasn't until the late 50's the package holiday became affordable, and gave many more people in the UK the opportunity to have their holidays abroad. However during the 70's the package holiday suffered a major blow, it was on the 15th August 1974, when at the time the second largest tour operator which was Horizon & Clarkson's went bankrupt. Because of this and estimated 50,000 tourists were left stranded on their holiday with no flight back, and 100,000 others lost their holidays that they booked with the company before it crashed. This is not such a problem to worry about know, as the majority or tour operators and travel agencies are protected by trade organisations, such as AITO and ABTA who provide financial support should anything go wrong. ...read more.

This helps the industry as the longer you stay alive, the more holidays you are likely to take. The older generation are probably key to the industry, as they are more likely to have more disposable income than someone in their 20's, there children have probably grown up and left home which probably leaves them with big houses that they wish to sell as a house of that size is not needed anymore. This then leaves them with lots of money, on which they could spend on a week on a luxury cruise in the Caribbean. The biggest downsides to the current developments of the industry are probably natural disasters and wars / terrorism. Natural disasters really do affect parts of the industry, more so the destination. Places like Florida, one of the biggest cities for tourism in the world, yet each year in August it is a place prone to hurricanes and tornados, a couple of years ago there was a disastrous hurricane, hurricane Katrina during the time of this the state would have received very little tourism. One of the biggest natural disasters of the last ten years was the tsunami in Asia; it wiped out whole towns and left the place in ruins. Wars / Terrorism also play a big part on the industry, as if there is a terrorist attack people don't feel safe and if people don't feel safe they are more likely to choose a different destination. A few examples of places that have been affected are New York September the 11th, Bali where 202 people were killed from three bombs, Kenya, London 7/7 where 52 people were killed and a further 700 were injured. There are also destinations that people would not consider going to because they have history of wars and violence, for example Northern Ireland or places like Iraq and Israel. ?? ?? ?? ?? H.Hales Travel & Tourism The development of the Industry - 1 - ...read more.