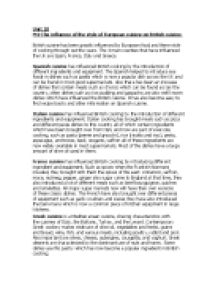 The influence of the style of European cuisine on British cuisine

﻿Unit 10 M1-The influence of the style of European cuisine on British cuisine British cuisine has been greatly influenced by European food and there style of cooking through out the years. The 4 main counties that have influenced the UK are Spain, France, Italy and Greece. Spanish cuisine has influenced British cooking by the introduction of different ingredients and equipment. The Spanish helped to introduce sea foods in dishes such as paella which is now a popular dish across the UK and can be found in most good supermarkets. ...read more.

Italian cuisine has influenced British cooking by the introduction of different ingredients and equipment. Italian cooking has brought meals such as pizza and different pasta dishes to this country all of which contain ingredients which have been brought over from Italy and now are part of everyday cooking, such as pasta (penne and gnocchi), rice (risotto and riso), pesto, asparagus, anchovies, basil, oregano, saffron all of these ingredients are now widely available in most supermarkets. Most of the dishes have a large amount of olive oil used in them. ...read more.

The French have also brought over different pieces of equipment such as garlic crushers and sieves they have also introduced the bain-marie which is now a common piece of kitchen equipment in large kitchens. Greek cuisine is a Mediterranean cuisine, sharing characteristics with the cuisines of Italy, the Balkans, Turkey, and the Levant. Contemporary Greek cookery makes wide use of olive oil, vegetables and herbs, grains and bread, wine, fish, and various meats, including poultry, rabbit and pork. Also important are olives, cheese, aubergine, courgette, and yoghurt. Greek desserts are characterized by the dominant use of nuts and honey. Some dishes use filo pastry which has now become a popular ingredient in British cooking. ...read more.