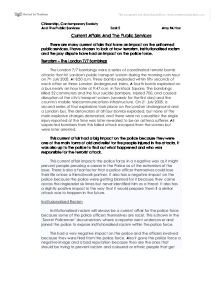 There are many current affairs that have an impact on the uniformed public services. I have chosen to look at how terrorism, institutionalised racism and the pay dispute have had an impact on the police force.

Current Affairs And The Public Services There are many current affairs that have an impact on the uniformed public services. I have chosen to look at how terrorism, institutionalised racism and the pay dispute have had an impact on the police force. Terrorism - The London 7/7 Bombings The London 7/7 bombings were a series of coordinated terrorist bomb attacks that hit London's public transport system during the morning rush hour on 7th July 2005. At 8:50 a.m. Three bombs exploded within fifty seconds of each other on three London Underground trains. A fourth bomb exploded on a bus nearly an hour later at 9:47 a.m. in Tavistock Square. The bombings killed 52 commuters and the four suicide bombers, injured 700, and caused disruption of the city's transport system (severely for the first day) ...read more.

This current affair impacts the police force in a negative way as it might prevent people perusing a career in the Police as of the extremism of the issue. There is also a fear factor that a police officer themselves could lose their life or lose a friend/work partner. It also has a negative impact on the police because the police were getting blamed for it because they came across the ringleader six times but never identified him as a threat. It also has a slightly positive impact in the way that it would prepare them if a similar attack was to happen in the future. Institusionalised Racism Institutionalised racism will always be a current affair for the police force because some of the police officers themselves are racist. ...read more.

The Pay Dispute In 2008 police officers in England and Wales voted to lobby the government for the right to strike because in 2007 the Home Secretary decided not to backdate a 2.5% pay rise for police. The police officers said that their pay rise only paid from December 2007 in reality amounts to 1.9% therefore the Home Office has therefore breached an agreed deal. The dispute was not over the increase set by the Police Arbitration Tribunal, but the manner in which the Home Office decided to pay it. If the police officers went on strike it would have a negative impact because there would be less police officers to deal with crime, and the public would think that going on strike is more important to them than preventing and dealing with crime. ?? ?? ?? ?? Citizenship, Contemporary Society And The Public Services Task 2 Amy Nutton ...read more.