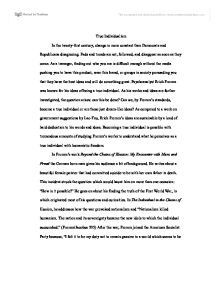 True Individualism In the twenty-first century, change is more constant than Democrats and Republicans disagreeing. Fads and trends are set, followed, and disappear as soon as they come. As a teenager, finding out who you are is difficult enough without the media pushing you to have this product, wear this brand, or groups in society persuading you that they have the best ideas and will do something great. Psychoanalyst Erich Fromm was known for his ideas of being a true individual. As his works and ideas are further investigated, the question arises: can this be done? Can we, by Fromm's standards, become a true individual or are these just dream-like ideas? As compared to a work on government suggestions by Lao-Tzu, Erich Fromm's ideas are sustainable by a load of hard dedication to his words and ideas. Becoming a true individual is possible with tremendous amounts of studying Fromm's works to understand what he perceives as a true individual with humanistic freedom. In Fromm's work Beyond the Chains of Illusion: My Encounter with Marx and Freud the German born man gives his audience a bit of background. He writes about a beautiful female painter that had committed suicide to be with her own father in death. This incident struck the question which would haunt him on more than one occasion: "How is it possible?" He goes on about his finding the truth of the First World War, in which originated most of his questions and curiosities. ...read more.

Conversely, no civilization has in it any element which in the last analysis is not the contribution of an individual. Where else could any trait come from except from the behavior of a man or a woman or a child?" (Benedict/Jacobus 306) One of Fromm's 'heroes' agrees as well. Karl Marx, "He [Marx] believed that our individual thoughts are patterned after the ideas any given society develops, and that these ideas are determined by the particular structure and mode of functioning of the society. (Fromm Beyond 14) As for our society tricking us in the twenty-first century, it is very common. Instead of war groups, we have tons of cliques and movements. Cliques are so common in schools, they are overlooked. Like the industrial system, most of the time, cliques have a hierarchical organization to them. This is regularly seen on television shows and sometimes in reality. In recent times, we see more movements than a politician's fibs. The most popular unofficial movements are the "peace" and "go green" movements. These movements have splashed peace signs and the go green phrase on clothes, accessories, house hold items, and much more. They have been erected to bring awareness and promote the coming times of peace and change and environmental awareness, respectively. It sounds like it would really help America and every wholesome person would join in, right? That seems like society's tricks being played. ...read more.

With everyone dropping their prejudices, they should be open to everyone's ideas and be looking at them as equal to themselves. But let's get real, only the perfect society would contain truly free people without prejudices against one another. If we are free individuals being accepting of men as we accept ourselves, ideas would not clash, they would just linger in the air. If one were to strive to have the freedom Fromm talks of and allow the strangers to be understood as we understand ourselves, then with time, it would be possible to achieve individualism. However, it would be a long and sometimes grueling journey. Fromm's words are not easily understood. If completed correctly, the full process may take years, possibly a lifetime. With the equality of all men, it would seem that everything would be perfect in this society. However, there are certain people that would give up understanding Fromm's ideas or select persons that would not want individuality on account of their stubbornness. These people are the ones that are happy thinking they have freedom in the industrial system. In conclusion, it is quite possible for one to follow the ideas of Erich Fromm, but it would not be possible for the whole world to achieve. A person with true freedom, viewing his fellow humans as equal to himself, and following his heart...This would be too much unless the whole world were in on it. Erich Fromm's ideas on individualism are quite thick, but would be worth the journey; true freedom, to do anything and not judge anyone around you-that would be perfect. ...read more.