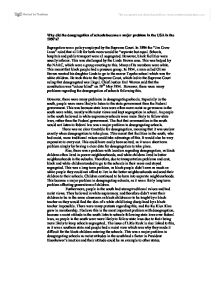 Why did the desegregation of schools become a major problem in the USA in the 1950's? Segregation was a policy employed by the Supreme Court. In 1896 the "Jim Crow Laws" ruled that all life for both races would be "separate but equal. Schools, hospitals and public transport were all segregated. However, black facilities were usually inferior. This was challenged by the Linda Brown case. This was helped by the NAAC, which were a group reacting to this. Many of its members were white. This meant that black people had a pressure group. In 1954, a man called Oliver Brown wanted his daughter Linda to go to the nearer Topeka school which was for white children. He took this to the Supreme Court, which led to the Supreme Court ruling that desegregated was illegal. Chief Justice Earl Warren said that the constitution was "colour blind" on 19th May 1954. However, there were many problems regarding the desegregation of schools following this. However, there were many problems in desegregating schools. Especially in the south, people were more likely to listen to the state government than the Federal government. ...read more.

There were many protests regarding this, and the Ku Klux Klan grew in membership. I believe this is the most important problem with desegregation, because a racist attitude in the south links to schools following state laws over federal laws, as people in the south were more likely to follow state laws due to their being more likely to keep schools segregated.. The issue of Little Rock is also linked to this, as it was a southern state and people had a racist view which was why they made it difficult for the black children entering the schools. This was a major problem in desegregating schools as racist attitudes in the south had a factor in President Eisenhower's inaction and their attitude could be an example to other states. President Eisenhower did little to enforce segregation. He didn't discipline the south as he was afraid of starting conflict. He wanted to keep the support of the south, as he wanted to stay president, and get the south's vote. He did nothing to address issues today with location etc, which meant that schools were not pressured to desegregate. ...read more.

Even when their presence had been accept school life was very difficult for them. They were taunted by teachers and student alike, yet fighting back would lead to them being expelled. This example sped up the process of desegregation, even though it was the only time that Eisenhower enforced desegregation. Reacting to this Faubas closed all the schools in the town and didn't open them for five years. This was a short term problem, as although it was a major incident the fact that the children eventually got into the school was used as an example for other schools as President Eisenhower was seen to be enforcing desegregation. In conclusion, even though the desegregation law was passed there were still problems with desegregation. I believe that the most important problem was racist views in the south, as this led to other issues such as the incident in Little Rock and the state government vs. federal government. It was also a factor in President Eisenhower's inaction. An example of people in the South's racist attitude is the Ku Klux Klan, as the organising of a violent group shows how racist they were. ...read more.