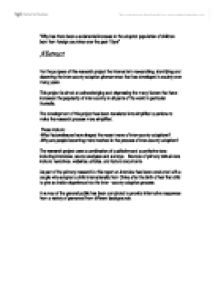 &quot;Why has there been a substantial increase in the adopted population of children born from foreign countries over the past 10yrs&quot;

"Why has there been a substantial increase in the adopted population of children born from foreign countries over the past 10yrs" Abstract For the purpose of this research project the interest is in researching, identifying and observing the inter-country adoption phenomenon that has developed in society over many years. This project is aimed at acknowledging and expressing the many factors that have increased the popularity of inter-country in all parts of the world in particular Australia. The development of this project has been translated into simplified questions to make the research process more simplified. These include: -What factors/issues have shaped the recent wave of inter-country adoptions? -Why are people becoming more involved in the process of inter-country adoption? The research project uses a combination of qualitative and quantitative data including interviews, source analyses and surveys. Sources of primary textual data include: narratives, websites, articles, and lecture documents. As part of the primary research in this report an interview has been conducted with a couple who adopted a child internationally from China after the birth of heir first child to give an inside experience into the inter -country adoption process. A survey of the general public has been completed to provide informative responses from a variety of personnel from different backgrounds. 2 Acknowledgements The Olden Family, Rod, Alison, Brad and Lucy - For sharing their personal experience with me **** Xiaobei Chen (Assistant Professor, School of Social Work University Of Victoria, Canada) - For emailing me Information he uses in his lectures **** The People who participated in My Survey - For answering them honestly and returning them to me **** Mrs. Avery - For helping me find a topic, making me do mind Maps and helping me refine my question **** Mrs. Hammond and Mrs. Cross - For allowing me "Long Service Leave "of books and clipping files from the library. 3 Introduction Inter-Country adoption is an aspect that has undergone a great deal of change in the past ten years. ...read more.

We weren't even told her medical history because she had no records or anything with her only her birth certificate. Interviewer: Even though she was adopted as a baby, do you think that her being adopted and brought to another country has had an impact on her development and well being? R: I think that it may have had an impact when she first started school but now it doesn't seem to affect her as much. We had to deal with the questions we knew she would ask such as "why do I look different to you?" and such, but now its ok. Lucy knows she's adopted and she'll tell anyone who asks her (laughs). She speaks English okay and does well at school and has many friends. Though one day I know she'll want to meet her real parents and we will make sure that if she does that she does get to meet them. Interviewer: Why do you think that inter-country adoption has become a popular choice for many people? A: I think it's because their aren't as many children available through local adoption and because that process takes so long .....To wait for it to go through. R: I think it's because.....well celebrities have made it popular such as Angelina Jolie and Meg Ryan.... I think she has a child adopted from overseas. I think that young people or couples see this and like the idea of a "Rainbow Family". A: I also think that it's because the inter-country adoption process is more open to all types of people. Interviewer: Well, thank you very much for participating in this interview. Your story has been really helpful and has provided me with a lot of answers. A&R: Thank you for choosing us and we're glad that we were able to help. A short survey was also conducted among a sample of 30 people using a questionnaire, in an attempt to determine if the option of inter-country adoption appealed to people and to observe their thoughts on why they believe that inter-country adoption has become so popular. ...read more.

In inter-country adoption, these legal complications are practically unheard of. The birth parents rights have been relinquished. Most international adoptions are finalized in a court abroad, so the child is legally yours before you come home. -Choice of Child: You may specify the sex and age of your child, or you may choose a particular boy or girl from a list of available children in a central registry. For those who want to be guaranteed a daughter rather that a son, China is the place to go. - Flexibility in rules: Strict criteria in receiving countries may exclude people because they are older, single, gay or the wrong religion. Whereas various overseas agencies offer a variety of eligible criteria. -Track record: You may know someone who adopted abroad and may be impresses with their success. 20 After looking at the extensive secondary research used for this task, it appears reasonable to also conclude that: - Little research in relation to the increased demand for inter-country adoption in receiving countries and how it is shaped by the internal politics and policies surrounding has been done. - For those who don't have a good and fair chance with the domestic adoption process, the appeal of inter-country adoption is irresistible. In inter-country adoption everybody who wants to adopt a child is basically successful. - The increase in the number of inter-country adoptions has left domestic adoptions striving to compete with inter-country adoptions. - Unlike IVF, the fees aren't subsidized by the government and the $3000 baby bonus is only paid if the child is under 2 years of age. There are many reasons which have lead to the increase in internationally adopted children. The researcher recommends that a more substantial amount of research should be conducted for future reference to this subject. From this research project, it would seem that the substantial increase in the population of children adopted from overseas is due to and as a result of the above statements. ...read more.