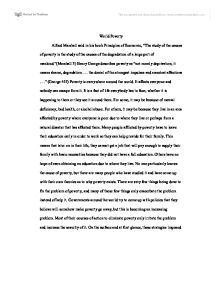 World Poverty Alfred Marshall said in his book Principles of Economic, "The study of the causes of poverty is the study of the causes of the degradation of a large part of mankind."(Marshall 3) Henry George describes poverty as "not merely deprivation; it means shame, degradation . . . the denial of the strongest impulses and sweetest affections . . ." (George 455) Poverty is everywhere around the world. It affects everyone and nobody can escape from it. It is a fact of life everybody has to face, whether it is happening to them or they see it around them. For some, it may be because of mental deficiency, bad health, or alcohol abuse. For others, it may be because they live in an area affected by poverty where everyone is poor due to where they live or perhaps from a natural disaster that has affected them. Many people afflicted by poverty have to leave their education early in order to work so they can help provide for their family. This means that later on in their life, they cannot get a job that will pay enough to supply their family with basic necessities because they did not have a full education. Others have no hope of even obtaining an education due to where they live. ...read more.

They may be afflicted by poverty because the soil where they live is rocky or unfertile, making it very hard to produce their own food and leaving them unable to provide adequate food for their families. When areas are ruined environmentally, people often say "It's basically a poor country." or "It's a pretty barren region." as if to use these as excuses to why those inhabitants are poor (410). A natural disaster such as a tsunami, hurricane, tornado, or earthquake can also aid in the deprivation of the people of a city. When awful disasters like this happen, the inhabitants of the affected area are often unprepared and therefore are left with nothing but the clothes on their backs. They then have to start over with almost nothing and try to provide for their families as best they can. People affected by insular poverty tend to move to areas that offer more hope and chances for survival even if they are not much better than where they were before. Galbraith describes it when he says "Grim as life is in the urban ghetto, it still offers more hope, income, and interest than in the rural slum." (410) Although the exact cause of poverty is unknown, many people have their theories as to why it is a problem throughout the world. ...read more.

Many poor countries are rich in arable land and natural resources so Smith explains that "exporting food may be profitable for the exporting country, but when their land is capable of producing adequate food, it is a disaster to the importing countries." (Smith 66) When the United States continues furnishing free or lower priced foods to Third World countries, it results in "shattered Third World economies" (Smith 67). Poverty is an ongoing problem that will probably be around for a very long time. While many people think they can solve the problem of poverty, Galbraith says it may not be able to be completely fixed. He says "it is not remedied by a general advance in income". (Galbraith 411) In other words, just because the economy improves and people earn more money, it does not mean people will magically emerge out of poverty. People can try to overcome the frustrations of the environment around them like infertile soil or natural disasters, but something will always hinder them from overcoming it completely. Galbraith explains it like this: "advance cannot improve the position of those who, by virtue of self or environment, cannot participate."(411) Government policies that are being enforced are also not helping eliminate the problem of poverty. Instead, they are only exacerbating the problem and therefore, poor people are suffering because of it. All in all, poverty will never be eradicated, but we can try our best to do our part to end it. ...read more.