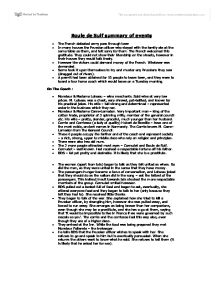 Boule de Suif summary of events * The French defeated army pass through town * In many houses the Prussian officer who stayed with the family ate at the same table as them, and felt sorry for them. The French welcomed this gratitude. They could not show their friendship on the streets, however in their houses they would talk freely. * However the victors could demand money of the French. Whatever was demanded. * Some took it upon themselves to try and murder any Prussians they saw (dragged out of rivers). * A permit had been obtained for 10 people to leave town, and they were to board a four horse coach which would leave on a Tuesday morning. On The Coach : * Monsieur & Madame Loiseau - wine merchants. Sold wine at very low prices. M. Loiseau was a cheat, very shrewd, pot-bellied, and known for his practical jokes. His wife - tall strong and determined - represented order in the business which they ran. * Monsieur & Madame Carre-Lamadon. Very important man - king of the cotton trade, proprietor of 3 spinning mills, member of the general council etc. ...read more.

Mme Follenvie replies by saying true, however surely we should then kill the kings, as they are the ones who start war. * They all go to bed after supper. Loiseau listens and watches out of his keyhole into the corridor, and hears and sees Cornudet trying to sleep with BDS, but she is denying him admission into her room. Voices are raised. He can't understand why she won't and she explains that in this place it would be wrong, as there are Prussians in the house. * In the morning when they were due to leave in the coach again, the driver was not there, so the 3 men of the group searched the village for him. They talked about the Prussians and how they hated war and being away from families just as much as them, until they finally found the driver in the village caf�, who claimed he had orders late last night from the Prussian officer not to saddle up the horses at all. The 3 confused men headed back to the inn to find out why. * They were not allowed to see the officer, but eventually M. ...read more.

Everyone was happy and celebrated, apart from Cornudet, who remained silent all night. Eventually Loiseau asked him what was up and he replied 'I tell you all, you have done an infamous thing!' Then left the room. * Loiseau then explained (laughing) that it was because Cornudet had tried to sleep with her but had been refused because the Prussian was in the next room. They all cried with laughter. * The following morning the coach was ready, and BDS, with her head down, embarrassed, climbed in with the others. Cornudet was also quiet. Nobody addressed her, apart from Mme Loiseau who said 'What a mercy, I am not sitting beside that creature', as she was appalled at BDS for sleeping with a foreign officer. * After a while people became hungry and began to eat the food they had brought with them. BDS had forgotten to bring any, and she was offered food by nobody. She felt the rage building up within her, and she began to cry. Others began to notice but offered no words of comfort. Mme Loiseau laughed and said 'She's weeping for shame.' * Cornudet began to whistle a song, and sometimes even hum the words, and between verses you could sometimes hear a sob that BDS was not able to restrain. ...read more.