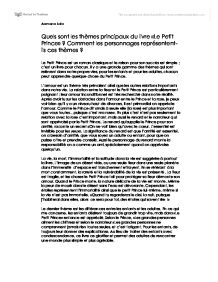 This essay is a semantically solid piece of work, demonstrating a good understanding of the novel and the question, but it seems that the writer got ahead of himself/herself in terms of language. It is clear that this is not ...

This essay is a semantically solid piece of work, demonstrating a good understanding of the novel and the question, but it seems that the writer got ahead of himself/herself in terms of language. It is clear that this is not the writer's first language, and thus some points must be awarded to making a good, relatively precise effort with the content. Three general points are made, each of them important in the novel; they are accompanied by examples and well-developed in terms of ideas. The structure is clear, with an introduction that actually introduces the topic, a comprehensive body and a confident conclusion that gives a thoughtful twist to the essay (Ã¢â‚¬Å“livre qui prit un forme diffÃƒÂ©rent pour chacun et change toutes les fois que vous lisezÃ¢â‚¬Â - I'm not saying the language is correct here!). Unfortunately, as a general rule, the language errors tend to block out the meaning; the mistakes force the reader to think about the language, rather than the semantics.

The level of analysis is appropriate for a literary essay in a foreign language. The writer digs into the theme of love and appropriately alludes at the lonely craving for love and friendship in the novel. It's nice to see that when he/she brings up the friendship represented by the fox, we are actually given a brief analysis of the character himself. I would suggest that the 2nd paragraph be expanded in order to allow for a more natural and close text analysis; the writer mentions Ã¢â‚¬Å“life, death, immortality and lonelinessÃ¢â‚¬Â, but doesn't develop the themes enough to give them appropriate significance. But other than that, the contents of all the paragraphs point towards the relationship between illusion and disillusionment, togetherness and solitude, which are fundamental in the text. Overall, well done on the analytical front.

It is easy to see that the writer has some flair and fluidity in French, but it must also be said that there are many grammatical mistakes (the ones brought up here are recurring issues that must be worked on). First of all, the issue of genders. When it comes to nouns on their own: e.g. it should be Ã¢â‚¬Å“la raisonÃ¢â‚¬Â, not Ã¢â‚¬Å“leÃ¢â‚¬Â. Then attributive adjectives: in French, we match the adjective to the noun, so instead of Ã¢â‚¬Å“qui sont apprivoisÃƒÂ©Ã¢â‚¬Â, the French should read Ã¢â‚¬Å“qui sont apprivoisÃƒÂ©sÃ¢â‚¬Â. Oddly, the writer does not seem to realize that a noun in plural should be followed by a verb in plural... Hence we get the incorrect Ã¢â‚¬Å“les choses...dÃƒÂ©monteÃ¢â‚¬Â, Ã¢â‚¬Å“La vie, la mort, lÃ¢â‚¬â„¢immortalitÃƒÂ© et la solitude dans la vie est suggÃƒÂ©rÃƒÂ©eÃ¢â‚¬Â. To finish off, we can see that the writer is trying hard to make the text sound intellectual, but sometimes it would help to look things up in a dictionary/grammar book. Thus, we've got an odd subjunctive construction, which omits the necessary Ã¢â‚¬Å“queÃ¢â‚¬Â in Ã¢â‚¬Å“il est primordial on apprÃƒÂ©cieÃ¢â‚¬Â. Ã¢â‚¬Å“PrimordialÃ¢â‚¬Â also sounds a little bit funny; it's probably not something a French speaker would happily use. All in all, the writer needs to put more emphasis on writing in grammatically correct language.