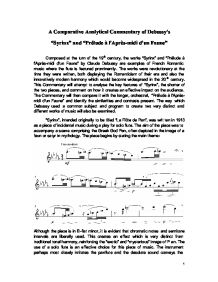 A Comparative Analytical Commentary of Debussy's "Syrinx" and "Pr�lude � l'Apr�s-midi d'un Faune" Composed at the turn of the 19th century, the works "Syrinx" and "Pr�lude � l'Apr�s-midi d'un Faune" by Claude Debussy are examples of French Romantic music where the flute is featured prominently. The works were revolutionary at the time they were written, both displaying the Romanticism of their era and also the innovatively modern harmony which would become widespread in the 20th century. This Commentary will attempt to analyse the key features of "Syrinx", the shorter of the two pieces, and comment on how it creates an effective impact on the audience. The Commentary will then compare it with the longer, orchestral, "Pr�lude � l'Apr�s-midi d'un Faune" and identify the similarities and contrasts present. The way which Debussy used a common subject and program to create two very distinct and different works of music will also be examined. "Syrinx", intended originally to be titled "La Fl�te de Pan", was written in 1913 as a piece of incidental music during a play for solo flute. The aim of the piece was to accompany a scene comprising the Greek God Pan, often depicted in the image of a faun or satyr in mythology. The piece begins by stating the main theme: Although the piece is in B-flat minor, it is evident that chromatic notes and semitone intervals are liberally used. ...read more.

which ends this phrase completes the diminished broken chord from before, albeit with much delay and notes filling in between. The fact that A is spelt as the enharmonically equivalent B(( suggests that the music will modulate, which is exactly what Debussy proceeds to do next after a brief repetition of this quavers phrase. The music continues by quickly changing to a major key: At bar 19 the triplet-quaver rhythm ceases suddenly and is followed by a flowing passage with a wider range of movement than before. Although not evident in the score, when heard bars 20 and 21 is distinctively major. The presence of an F(, C( and all other notes flattened would suggest the key is G(-major. This is interesting as this is a modulation to the submediant which is usually used to change to the relative minor key from a piece with major tonality. However in this case it is the reverse, with a modulation to a major key from a minor tonality. The function of this phrase could be explained better if the context which it appears is known. Here the music is preparing to enter the final section restating the opening theme of the piece after a further modulation at bar 22. This brief major section "prepares" this modulation by providing contrast between the previous and following minor sections. ...read more.

"Syrinx", being a depiction of a scene of a solitary faun playing the panflutes, is well suited to a free, performer-centred and almost impromptu form. "Pr�lude", being set to a whole story, is better served by having a more defined structure. Both "Syrinx" and "Pr�lude � l'Apr�s-midi d'un Faune" are examples of the works of a Romantic composer at the zenith of his productivity. By using chromaticism, whole tones, complex harmonies and unusual and distant modulations they are strong examples of the departure from the orthodox melodic and harmonic features found in the earlier Baroque and Classical eras. The link between them is uncommonly strong for two different works by the same composer due to their common program. This, and the fact that at the time they are at the cusp of a transformation of the prevailing music style from Late Romantic to Modernism, ensures these pieces will continue to have both artistic and historical value and will be enjoyed long into the future. Analytical Commentary Plan Debussy: Pr�lude � l'apr�s-midi d'un faune * Orchestration * "Modern" harmony * Tone "qualities" and voicing * Motifs * Imagery imagined by the audience * Evaluation and personal response * Comparison and similarities with Syrinx * Depiction of a faun * Representation by the flute * Harmonic similarities * Orchestral vs. unaccompanied * Free form * Romanticism * Departure from strict structures in earlier eras * Brief comparison with earlier music * Why does it work? ?? ?? ?? ?? 1 ...read more.