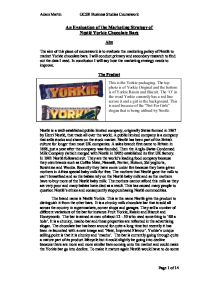 An Evaluation of the Marketing Strategy of Nestl Yorkie Chocolate Bars.

An Evaluation of the Marketing Strategy of Nestl� Yorkie Chocolate Bars Aim The aim of this piece of coursework is to evaluate the marketing policy of Nestl� to market Yorkie chocolate bars. I will conduct primary and secondary research to find out the data I need. In conclusion I will say how the marketing strategy needs to improve. The Product Nestl� is a well-established public limited company, originally Swiss formed in 1867 by Henri Nestl�, that trade all over the world. A public limited company is a company that sells stocks and shares on the stock market. Nestl� has been part of the British culture for longer than most UK companies. A sales branch first came to Britain in 1868, just a year after the company was founded. Then the Anglo-Swiss Condensed Milk Company (which merged with Nestl� in 1905) established its first UK factory. In 1901 Nestl� followed suit. They are the world's leading food company because they own brands such as Coffee Mate, Nescaf�, Perrier, Buitoni, Ski yoghurts, Rowntree and Wonka. Recently they have come under fire because they have given mothers in Africa special baby milk for free. The mothers that Nestl� gave the milk to can't breastfeed and so the babies rely on the Nestl� baby milk and so the mothers have to buy more of the Nestl� baby milk. The mothers cannot afford this milk as they are very poor and many babies have died as a result. This has caused many people to question Nestl�'s ethics and consequently stop purchasing Nestl� commodities. The brand name is Nestl� Yorkie. This is the name Nestl� give the product to distinguish it from the other bars. It is a chunky milk chocolate bar that is sold all across the country in supermarkets, corner shops and garages. They sell a number of different variations of the bar for instance Fruit Yorkie, Raisin and Biscuit and Honeycomb. ...read more.

The prime positions would be in the middle of the shelf on the top 3 shelves as this is usually eye level and easy for most people to reach. This is where Nestl� should try and sell Yorkie bars, as this would make them catch the eye better. Children's chocolate bars and other sweets would be on lower shelves as this is easier for them to spot and reach. Final Conclusion Yorkie is a chocolate bar that is aimed at men. Nestl� say that it is the only chocolate bar on the market that is aimed specifically at men. I don't think Nestl� should change the target audience I just think that they should be less controversial in their marketing. It is designed to fulfil hunger and act as a macho statement. It has chunky pieces of chocolate that are portrayed to be masculine. The Not For Girls advert campaign was generally a bad idea because it raises sexism issues and these can be very strongly opposed now in the 21st century. I think Yorkie would benefit from a new logo and new packaging to make the bar jump out at people whilst on the shelf. Also it could do with changing the Not for Girls adverts as these have offended a lot of people. Also as there was already people who refused to buy anything Nestl� because of the baby milk fiasco, it was probably a bad idea for Nestl� to come out with this slogan. Overall I think Yorkie is doing quite well. The slogan may have been a bad idea but it has appealed to a lot of men because they feel that if they buy it, it will make them more of a man compared to other chocolate bars. If it was sold on one of the top shelves in the middle, reduce the price and had new packaging a lot more Yorkies would be sold overall. Adam Martin GCSE Business Studies Coursework Page 1 of 14 ...read more.