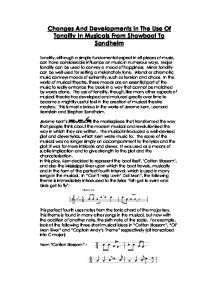 Tonality, although a simple fundamental aspect in all pieces of music, can have considerable influence on music in numerous ways.  Major tonality can be used to convey a mood of happiness.  Minor tonality can be well used for setting a melancholy tone.  Atonal or chromatic music conveys moods of extremity, such as tension and chaos.  In the world of musical theatre, these moods are an essential part of the music to really enhance the book in a way that cannot be matched by words alone.  The use of tonality, though, like many other aspects of musical theatre has developed and matured greatly over time to become a mightily useful tool in the creation of musical theatre mastery.  This is most obvious in the works of Jerome Kern, Leonard Bernstein and Stephen Sondheim.

Jerome Kern’s Showboat is the masterpiece that transformed the way that people think about the modern musical and revolutionised the way in which they are written.  The musical introduced a well-devised plot and clever lyrics, which Kern wrote music to.  The score of the musical was no longer simply an accompaniment to the lyrics and the plot; it was far more intricate and clever.  It was used as a means of subtle implication and to give strength to the plot and the characterisation.

In this play, Kern decided to represent the boat itself, ‘Cotton Blossom’, and also the Mississippi River upon which the boat travels, musically and in the form of the perfect fourth interval, which is used in many songs in the musical.  In “Can’t Help Lovin’ Dat Man”, the following theme is immediately introduced to the lyrics ‘Fish got to swim and birds got to fly’:

This perfect fourth uses notes from the tonic chord of the major key.  This theme is found in many other songs in the musical, but now with the addition of another note, the sixth note of the scale.  For example, look at the following three short musical ideas in “Cotton Blossom”, “Ol’ Man River” and “Captain Andy’s Theme” respectively (all transcribed into C major):

As can be seen, all these ideas use the three notes C, A and G, all used to symbolise the boat and the river.  In fact, the notes of “Ol’ Man River” are simply the same notes as in “Cotton Blossom”, but inverted.  The tempo was also slowed down a touch, overall giving a rather more melancholy mood.

Kern was very bold in introducing racial issues into a Broadway musical for the first time, and he was keen on the idea of using his music to give subtle references to the background of his characters.  The character of Julie La Verne in Showboat is a “mulatto” woman, meaning she had one African parent and one European parent, unbeknown to the audience at the start of the play.  Before this is definitively revealed to the audience, a song entitled “Can’t Help Lovin’ Dat Man” is introduced by Julie. This song is in the key of Eb major, but Kern introduces blue notes into the song, and as blues is obviously associated with the African slave workers, this is a clever hint to the background of Julie which is later to be revealed.

West Side Story  by Leonard Bernstein tells the story of two rival youth gangs, the Jets and the Sharks, in the USA.  This rivalry creates a lot of tension between the gangs, which Bernstein conveys superbly by including dissonance in many of the songs, and he creates this dissonance largely through the use of the tritone interval.

A tritone is an interval of a diminished fifth (or augmented fourth), and the two notes are seen as the most distant notes from each other in any scale, as one of the notes is exactly halfway between an octave of the other note, and this is why Bernstein chose to use this interval to represent the clash between the rival gangs.  In the first number of the musical, “Prologue”, a three-note musical motif that includes the tritone interval appears for the first time.  In this motif, the first two notes are a tritone apart, which resolves in the third note, which rises a semitone.  This motif is most obviously heard for the first time in “Maria”, where the main melody starts with the three notes C, F# and G, in the key of C major:

The F# is not a note from the key of C major, but it can be seen that it is used much of the time in the melody in the place of F natural.

This motif can also be found in “Rumble” and “Cool”, and in fact the song “Cool” uses this motif to an extreme.  It forms the bass line at the beginning and the end of the song, and various parts of the melody also use it:

Start of vocal melody from “Cool” -

The tritone interval is not only used in terms of melody notes, but Bernstein has also used it when considering key.  In the song “Gee, Officer Krupke”, the opening tonality of the piece is B major.  By the end of the piece it has modulated to F major, F being a tritone away from B.

In the last number of West Side Story, “Finale”, the high instruments of the orchestra are playing a C major chord, but the basses are interrupting it by playing the tritone note of this chord, F#, which only disappears in the very last bar of the piece, which creates a “last minute release of tension” at the end of the musical, relating to the two rival gangs resolving their differences.

Other forms of general dissonance are also used by Bernstein in West Side Story, including the central orchestral fugue in the song “Cool”, in which the theme contains all 12 musical notes.

So far, we can see that over the period between Jerome Kern’s Showboat and Leonard Bernstein’s West Side Story, the use of tonality in musicals had developed a great deal, but when Stephen Sondheim started to establish himself as a musical composer, he made musicals that were in a class of their own, and his use of tonality was a key factor in his musicals.  His work made a considerable impact on the world of musicals, and we can see why by studying the musical Sunday In The Park With George.

Sunday In The Park With George is a musical based on the painting ‘A Sunday Afternoon On The Island Of La Grande Jatte’ by Georges Seurat, and follows the story of the artist as he is painting it.  Georges Seurat adopted a pointillistic technique for his paintings, which is when the paint isn’t brushed on normally, but instead little dots of colour are dabbed onto the canvas.

In this musical, Sondheim, even though he is a mainly tonal composer, experiments with chromaticism in places.  In “Eulogies”, when each group of characters says a spoken tribute to Georges Seurat, a different note is played for each characters speech, which eventually builds up to a chord with each of the 12 musical notes in it, in the following order:

Through this, it shows that there are twelve characters, or groups of characters, in the musical that are represented in the painting.

A motif used throughout the first act of the musical, the ‘painting motif’, has a distinct chromatic feel to it:

This motif consists of all staccato quavers, and contains repeating notes, which is used to represent the repetitive adding of dots of paint to the painting.  This motif is featured throughout the score in songs such as “Colour and Light” and “Finishing the Hat”.  Also, it can be seen that, if you discount the Bb’s, the notes are descending in semitones from Eb to D to Db, which is resolved by the last number of the first act, “Sunday”, which is a almost wholly diatonic song.

Since the arrival of Jerome Kern’s Showboat, the way in which musicals are written and thought about has changed dramatically.  He introduced the idea of using the score of the musical as a means of subtle implication of what is happening within the book of the musical.  Many aspects of the score could be used to do this, and the role of tonality in the score was a particularly important one, and the way in which tonality is used in the score has changed dramatically over time.  Kern, however, used simple motifs and intervals for representing characters, and added blues notes to aid characterisation.  After Showboat, composers started to use tonality in even more complex and exciting ways.  Atonality was used to the extreme in Leonard Bernstein’s West Side Story, making good use of dissonance, particularly in the form of the tritone interval to represent tension between rival gangs.  The musicals of Stephen Sondheim took every aspect of the musical score and ejected them to a higher level of mastery.  He did this by using notes to represent characters, motifs to represent single objects and even actions, and by creating dissonances and consonances that was used to perfectly convey the mood and the situation of a song.

‘Enchanted Evenings: The Broadway Musical from Showboat to Sondheim’ by Geoffrey Block