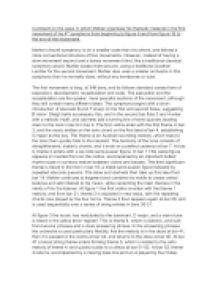 Comment on the ways in which Mahler organises his thematic material in the first movement of his 4th symphony from beginning to figure 8 and from figure 18 to the end of the movement.

Comment on the ways in which Mahler organises his thematic material in the first movement of his 4th symphony from beginning to figure 8 and from figure 18 to the end of the movement. Mahler's fourth symphony is on a smaller scale than his others, and follows a more conventional structure of four movements. However, instead of having a slow movement second and a dance movement third, like a traditional classical symphony would, Mahler swaps them around, using a traditional Austrian Landler for the second movement. Mahler also uses a smaller orchestra in this symphony than he normally does, without any trombones or tuba. The first movement is long, at 349 bars, and its follows standard sonata form of exposition, development, recapitulation and coda. The exposition and the recapitulation are the quieter, more peaceful sections of the movement, although they still contain many different ideas. The symphony begins with a short introduction of staccato B and F sharp on the first and second flutes, suggesting B minor. ...read more.

This is theme 4, which is diatonic, and built from two-bar phrases and a clear answering phrase. In the answering phrases the orchestra is used particularly flexibly; first the melody is in the oboe at bar 41, then it is passed to the violins at bar 44, and returns to the oboe at bar 45. At bar 47 a broad string theme enters forming theme 5, which is related to the cello melody of theme 4, and quickly builds to a climax at bar 51-52. At bar 52, theme 4 returns, accompanied by a moving bass line and an A played by four flutes. This leads to a more serene climax and a prolonged cadence before the music reaches figure 4. The closing section starts at bar 58 with theme 6; a playful little tune on the oboe, and a staccato bass line on the bassoon. The strings then take this idea forwards, and previously seen motifs begin to appear, for example, the triplet semi-quavers at bar 60, and the dotted rhythm scale at bar 66; both theme 2 ideas. ...read more.

The broad string melody from theme 5, then returns at bar 272. The movements closing section begins at bar 283, with many recognisable themes, such as the dotted rhythms scales in the bassoon, horn, cello and bass at bar 292. The shortened repeat starts at bar 298, with the return of the bells motif with a staccato chord in flute 1, 3 and 4. Flute 2 plays a semi-quaver accompanying figure, giving the motif a similar feel to the movements opening. There are more staccato chords reminiscent of the bells motif in the horn at bar 303, the clarinet and flute at bar 307 and the violin and viola at bar 308. The music slows to a halt before the coda at 340, and then picks up tempo once it has begun, creating energy through the use of more dotted rhythms scales over three octaves. The last four bars use the vigorous broken chords and the tonic/dominant harmony of the transition theme, bringing the music to a stirring close. This ending emphasises the na�ve nature of Mahler's ideas for the symphony, creating comforting end to the movement that satisfies the listener. ...read more.