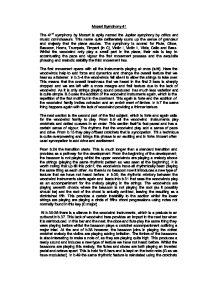 Critical commentary on the exposition of Mozart's 41st Symphony.

Mozart Symphony 41 The 41st symphony by Mozart is aptly named the Jupiter symphony by critics and music connoisseurs. This name quite deliberately sums up the sense of grandeur and majesty that the piece exudes. The symphony is scored for Flute, Oboe, Bassoon, Horns, Trumpets, Timpani (in C), Violin I, Violin II, Viola, Cello and Bass. Whilst the woodwind only play a small part in the piece, their role is key to accentuating the pace and vigour the first movement possess and the exquisite phrasing and melodic stability the third movement has. The first movement opens with all the instruments playing at once (tutti). Here the woodwinds help to add force and dynamics and change the overall texture that we hear as a listener. In b.3-4 the woodwinds fall silent to allow the strings to take over. This means that the overall brashness that we heard in the first 2 bars is sharply dropped and we are left with a more meagre and frail texture due to the lack of woodwind. ...read more.

The woodwinds are playing seventh chords where the bassoon is not playing the root (as it possibly should be) and the root of the chord is actually omitted, leaving the resulting as a diminished fifth. This provides a certain instability to the section whilst the lower strings are playing are playing a circle of fifths chord progressions using notes not normally found in this key (C major). IN b.35-36 there is a silence in the woodwind instruments, which is a prelude to an outburst in b.37. This lack of woodwind here provides an impact in the next bar when it is reintroduced. In this bar and the next, the oboe and flute play the same thing they were playing before whilst the bassoon plays a crotchet accompaniment outlining a major triad. At the end of b.38 however, the bassoon joins in playing the dotted crotchet melody the violins are playing adding imitation. The timbre of the bassoons is also interesting to make a note of, as they are playing quite high. ...read more.

This leads us to b.92 where it gets suddenly loud and the woodwinds play minims that contribute as reinforcement. In b.94, all the woodwind come in playing the same pattern as the lower strings and violins II. However, whilst this is going on there is an oboe still playing a tonic pedal note over the top of the melody. In b.100 there is a general pause that leads us swiftly into the next section. In b.101 there is no scoring for woodwind, however in b.103 the oboes rejoin again with a dominant inverted pedal. Up until b.111 the oboes are acting as an accompaniment to the other woodwinds that are playing the melody previously seen in the violins at the beginning of this section. Up until b.116 the woodwinds are generally only used as reinforcement for the melodies the strings are playing. In b.117 the offbeat crotchets the bassoon is playing tell us that we are coming to the end of this section as the syncopation has been used before to indicate the end of a phrase. The next section has modulated to a different key, which is Eb Major. ...read more.