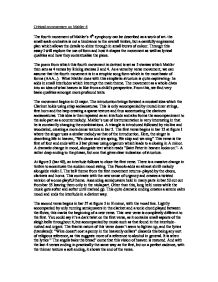 Critical commentary on the fourth movement of Mahlers 4th symphony

The fourth movement of Mahler’s 4th symphony can be described as a work of art- the small scale orchestra is not a hindrance to the overall timbre, but a carefully engineered plan which allows the details to shine through in small bursts of colour. Through this essay I will explore the use of form and how it shapes the movement as well as lyrical qualities and how they contextualise the piece.

The poem from which this fourth movement is derived is set as 5 stanzas which Mahler then sets as 4 verses by linking stanzas 3 and 4. As a verse by verse movement, we can assume that the fourth movement is in a strophic song form which is the most basic of forms (AAA...).  What Mahler does with this simplistic structure is quite captivating- he adds in small interludes which interrupt the main theme. The movement as a whole dives into an idea of what heaven is like from a child’s perspective. From this, we find very basic qualities amongst more profound texts.

The movement begins in G major. The introduction brings forward a musical idea which the Clarinet holds using crisp acciaccaturas. This is only accompanied by muted inner strings, first horn and the harp creating a sparse texture and thus accentuating the clarinets acciaccaturas. This idea is then repeated as an interlude and also forms the accompaniment to the solo part as a countermelody. Mahler’s use of instrumentation is very interesting in that he is constantly changing the combinations. A triangle is introduced followed by violins and woodwind, creating a more dense texture in bar 5. The first verse begins in bar 12 at figure 1 where the singer uses a similar melody as that of the introduction. Here, the singer is describing life in heaven, “We dance and we spring, We skip and we sing” This verse is the first of four and ends with a 3 bar phrase using organum which leads to a closing in A minor. A dramatic change in mood, alongside text which reads “Saint Peter in heaven looks on.”- A rather deep ending to the phrase, but one that gives clear indication of structure.

At figure 3 (bar 40), an interlude follows to close the first verse. There is a massive change in timbre to accentuate the sudden mood swing. The Piccolo adds an almost shrill melody alongside violin I. The bell theme from the first movement returns- played by the oboes, clarinets and horns. This contrasts with the new sense of urgency and creates a twisted version of a once playful theme. Ascending semiquavers held in many parts in bar 53 cut out from bar 55 leaving them only in the viola part. Other than this, long held notes while the music gets softer and softer until marked pp. This quite dramatic ending creates a serene calm mood and ends the interlude in a distinct way.

The second verse begins in bar 57 at figure 5 in E minor, with the vocal line. Lightly accompanied by only running semiquavers in the clarinet and a tonic chord played between the flutes, this marks the beginning of a new verse. This new verse is completely different to the first. You could say it’s a dark twist on the first verse, as it contains small aspects of the sleigh bells throughout it, but accompanied by music such as that found in the interlude- rushed and urgent. The frantic nature of this verse doesn’t seem to lighten up, and the lyrics (translated): “Wine doesn't cost a penny in the heavenly cellars” discards this being any sort of religious reference, as this suggests more of a reference to alcohol in general. It is when the lyrics “ The angels bake the bread” come that this vision of heaven is restored. And with the last 4 verses ending in practically the same way as the first, but on a perfect cadence, with the thinner texture a soft ending, it shows the end of the verse.

The interlude which precedes the third verse is also based on the sleigh bell theme and is very similar to the first interlude at first, however is greater in homophonic texture as there is an increased use of trumpets. The strong staccato quavers which have been heard fragmented throughout the movement so far come back even stronger, but then unexpectedly and rapidly thins down into the third verse, which in the same way is very similar to the first verse at the beginning. A dotted rhythm in the flute part then picks up the sense of hurry from the previous verse. This connects to the lyrics: “and gardeners who allow everything! If you want roebuck or hare, on the public streets...” as this vision is becoming slightly out of hand and maybe too free. A single line of running semiquavers is then passed between violins and flutes until the verse ends in a similar way to the other verses. The lyrics “saint Martha must be the cook!” is set to a chorale-like phrase, like the previous verse ending, but this time in Bb major. There is a childlike feeling to this part of the movement- especially when it comes to the text. “...good asparagus, string beans, and whatever we want.” Sounds like words out of a child’s mouth in that it’s very listed without good articulation, as well as the content being quite superficial.

The fourth and final verse is like the destination is a massive contrast to the previous three as it is set to music and instruments which would be more typical of heaven. A harp is introduced- playing on muted strings while a flute plays the melody. The instrumentation changes, from clarinets and bassoons to flutes. The vocal melody beginning in bar 142 is similar to the first verse for the first 5 bars. This part of the movement is, though the music the most sacred sounding. With the use of a plagal cadence from bars 151-152, you can hear a plagal cadence as it is commonly used in masses, and people refer to it as the ‘Amen’ cadence. From bar 158, there are brief modulations to G# and C# minor. But then the music does something unexpected and ends in the remote key of E major. When it only seems logical to end in G major, it is both profound and strange that the piece would end somewhere else. Lowering the key by a minor third creates a sense of relaxation and could symbolise moving from heaven to reality. The journey to heaven.

So, to summarise, Mahler makes use of instrumentation by changing texture to bring structure to the movement. This piece is relatively simple compared to his other works, so the small things like changing the dynamics were very effective in showing where a verse ended and began. The use of mood setting was a great indication of a new verse beginning, or an interlude.