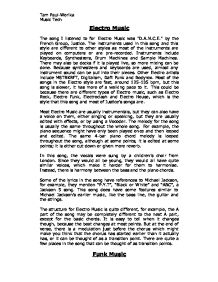 The song I listened to for Electro Music was "D.A.N.C.E." by the French Group, Justice. The instruments used in this song and this style are different to other styles as most of the instruments are played on computers or are pre-recorded. Instruments include Keyboards, Synthesizers, Drum Machines and Sample Machines. There may also be decks if it is played live, so more mixing can be done. Because synthesizers and keyboards are used, almost any instrument sound can be put into their pieces. Other Electro artists include MSTRKRFT, Digitalism, Daft Punk and Bodyrox. Most of the songs in the Electro style are fast, around 125-135 bpm, but this song is slower, it has more of a walking pace to it. This could be because there are different types of Electro music, such as Electro Rock, Electro Funk, Electroclash and Electro House, which is the style that this song and most of Justice’s songs are.

Most Electro Music are usually instrumentals, but they can also have a voice on them, either singing or speaking, but they are usually edited with effects, or by using a Vocoder. The melody for the song is usually the same throughout the whole song. For example, the piano sequence might have only been played once and then looped and edited. The same 4-bar piano chord melody is looped throughout the song, although at some points, it is edited at some points; it is either cut down or given more reverb.

In this song, the vocals were sung by a children’s choir from London. Since they would all be young, they would all have quite similar voices, which make it harder for them to harmonise. Instead, there is harmony between the bass and the piano chords.

Some of the lyrics in the song have references to Michael Jackson, for example, they mention “P.Y.T”, “Black or White” and “ABC”, a Jackson 5 song. This song does have some features similar to Michael Jackson’s earlier music, like the bass line, the guitar and the strings.

The structure for Electro Music is quite different, for example, the A part of the song may be completely different to the next A part, except for the basic chords. It is easy to tell when it changes though, because the beat changes at most points. But at the end of verse, there is a modulation just before the chorus which might make you think that the chorus has started earlier than it actually has, or it can be thought of as a transition point. There are quite a few places in the song that can be thought of as transition points.

The Jazz style I listened to was Funk Music. The song that I listened to for this style was “Virtual Insanity” by Jamiroquai. As well as having influences from Jazz, Funk music gets its influences from Rock and Roll, and RnB. The style is also similar to Soul Music, but with a more pronounced beat. Some Funk artists include James Brown, Marvin Gaye, Stevie Wonder and Sly & The Family Stone. More modern artists include Red Hot Chili Peppers, Outkast, The Black Eyed Peas and Van Hunt. “Virtual Insanity” was in the album “Travelling Without Moving” and sold 11.5 million copies worldwide, making it the most successful Funk album to date. The song also has a bit of influence from the Disco style and the Pop style. The usual instruments in a Funk song would be a Guitar, Drums, in some cases a Hammond Organ, a Horn Section and, most importantly, a Bass Guitar. Also in this song, there is a piano instead of an Organ, and a xylophone for the higher pitch in the song.

Funk Music, including this song, usually has a fast beat of around 110-130 bpm. Funk Music also has a more complicated rhythm than most other styles of music, because all of the instruments will play a different beat to create interlocking rhythms, all based around the piano. Although the different rhythms are complicated, even when together, the beat is easy to dance to.

The main melody is played on the piano, which plays syncopated chords and is mainly accompanied by the bass guitar and the strings at some points. Also during the chorus, the xylophone is playing as well, and it plays two notes for every chord that the piano is playing, which gives a slight harmony, as long as one of the notes it plays is not the root note.

The structure for this song is also quite complicated, as there are some parts that sound very similar to other parts, but is just a little bit different, or the part repeats but a bit differently, so you are unsure whether it is the same part or to consider it as a new part.