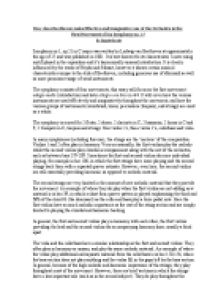 How does Beethoven make Effective and Imaginative use of the Orchestra in the First Movement of his Symphony no. 1?

﻿How does Beethoven make Effective and Imaginative use of the Orchestra in the First Movement of his Symphony no. 1? By Daniel Goode Symphony no.1, op.21 in C major was written by Ludwig van Beethoven at approximately the age of 25 and was published in 1801. It is best known for its characteristic 3-note rising motif played in the exposition and it?s harmonically unusual introduction. It is clearly influenced by the works of Haydn and Mozart, however it shows certain musical characteristics unique to the style of Beethoven, including generous use of sforzandi as well as more prominent usage of wind instruments. The symphony consists of four movements; this essay will focus on the first movement: adagio molto (introduction) and later allegro con brio in 4/4. It will cover how the various instruments are used effectively and imaginatively throughout the movement, and how the various groups of instruments (woodwind, horns, percussion (timpani), and strings) ...read more.

The viola and the cello/bass have a similar relationship as the first and second violins. They often play in harmony or unison, and play the same melodic material. An example of where the violas play additional and separate material from the cello/bass is in bar 150-156, where the bass section does not play anything and the violas fill in the gaps left by the bass section. In general, because of the high melodic and harmonic importance of the strings, they play throughout most of the movement. However, there are brief sections in which the strings have a less important role (such as in the second subject). They do play throughout the entire movement and are never left out entirely. The woodwind (also known as double woodwind) have a more prominent role in this symphony than in similar symphonies and orchestral pieces of the time; this is a key factor in Beethoven?s influence over music at the time and the eventual musical progression from classical to more romantic music. ...read more.

They are intended for use to best effect in their harmonic series using mainly the tonic and dominant, and therefore when the movement modulates to other keys these notes have less harmonic significance and hence the horns are used less. The horns and trumpets tend to play together much of the time. The horns are about the same register as the clarinets and fill in the middle block of the harmony. Finally, the percussion section consists solely of the timpani?s. During this time the timpani?s were tuned by hand and hence changing the tuning was time consuming and largely unheard of. The two timpani?s are tuned to the tonic and dominant (this is also the reason why in the second movement they are not used much because it is in a separate key) and hence are often used to much the same effect as the brass section ? to strengthen cadence points. Two examples of this are in bars 260 and 274. As loud instruments, they are basically only used in forte or fortissimo. By Daniel Goode 27th November 2012 ...read more.