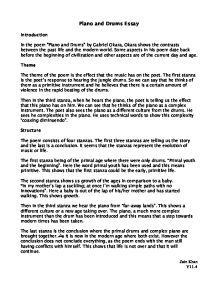 In the poem &quot;Piano and Drums&quot; by Gabriel Okara, Okara shows the contrasts between the past life and the modern world. Some aspects in his poem date back before the beginning of civilization

Piano and Drums Essay Introduction In the poem "Piano and Drums" by Gabriel Okara, Okara shows the contrasts between the past life and the modern world. Some aspects in his poem date back before the beginning of civilization and other aspects are of the current day and age. Theme The theme of the poem is the effect that the music has on the poet. The first stanza is the poet's response to hearing the jungle drums. So we can say that he thinks of them as a primitive instrument and he believes that there is a certain amount of violence in the rapid beating of the drums. Then in the third stanza, when he hears the piano, the poet is telling us the effect that this piano has on him. We can see that he thinks of the piano as a complex instrument. The poet also sees the piano as a different culture from the drums. He sees he complexities in the piano. He uses technical words to show this complexity "coaxing diminuendo". Structure The poem consists of four stanzas. ...read more.

However the conclusion does not conclude everything, as the poem ends with the man still having conflicts with himself. This shows that life is not over and that it will continue. Tone In the first stanza the tone is violent and aggressive, "bleeding flesh". The second stanza starts in the same tone of violence but midway through changes to a very calm state, "flowers pulsing". Then in the third stanza the tone is stays quite tranquil. The last stanza is still calm, with no sort of violent image that we saw in the beginning of the poem. Though I feel this stanza has a mystic feeling. The change of tone is in the second stanza when it goes from a violent tone to a state of peace and calmness. This affects the theme because the tone change makes us look at the rest of the poem in a different way. At the beginning of the poem we look at everything in a violent form but after the second stanza we think of the piano in a peaceful way. ...read more.

The diction that the poet has used is good because it helps us to create mental images of the poem. He uses words like 'primal', 'complexities' and 'concerto' which help us to understand the poem further. Primal helps us to understand the primitive life while, complexities and concerto shows us a new age of more modern items. Rhythm The poet has made the first stanza a long run-on line without much punctuation. This represents the rhythm of the poem. The run-on line could symbolize the flow of life/music. He could be trying to symbolize the way that life/music goes on and doesn't stop. The third stanza also has a run-on line which again, represents the same thing. There is a lot of alliteration used in the poem and this has an effect on the rhythm of the poem. "Coaxing diminuendo, counterpoint, crescendo" is an example of alliteration in the third stanza. This alliteration may represent the flow of notes in the piano and how it can be smooth. The use of the technique attracts our attention to the importance of the line. As the technical words used represent the piano's complexity in a new era of life. Response ?? ?? ?? ?? Zain Khan Y11-4 ...read more.

** The main problem with this essay is that CONTEXT is ignored. The poem is written by a post-colonial poet and this has huge bearing on the meanings within it. There are some good points made about the linguistic devices used in the poem. However, the essay structure, being set out in subsections, does not work well. The essay is too fragmented as as a result, ideas are not developed fully.