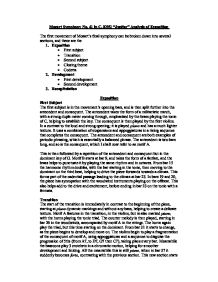 Mozart Symphony No. 41 in C, K551 &quot;Jupiter&quot; Analysis of Exposition

Mozart Symphony No. 41 in C, K551 "Jupiter" Analysis of Exposition The first movement of Mozart's final symphony can be broken down into several sections, and these are the 1. Exposition * First subject * Transition * Second subject * Closing theme * Codetta 2. Development * First development * Second development 3. Recapitulation Exposition First Subject The first subject is in the movement's opening bars, and is then split further into the antecedent and consequent. The antecedent takes the form of a militaristic march, with a strong duple meter coming through, emphasized by the brass playing the tonic of C, helping to establish the key. The consequent is then played by the first violins. In a contrast to the loud and strong opening; it is played piano and has a much lighter texture. It uses a combination of suspensions and appoggiaturas in a rising sequence that completes the consequent. The antecedent and consequent are both examples of periodic phrasing, which is essentially a balanced phrase. The antecedent is two bars long, and so is the consequent, which I shall now refer to as motif A. This is then followed by a repetition of the antecedent and consequent but in the dominant key of G. ...read more.

The brass start playing an augmented version of the fanfare, meanwhile there is an inverted pedal being played in the flutes, lasting 8 bars from bar 39 onwards. At bar 44 the fragmented consequent appears again in the bassoons, and the brass start to play the original fanfare from motif B. In bar 49, the brass and bass start to play a pedal, as the whole of motif B is reintroduced into the orchestra, in the dominant of G; climaxing at bar 55 with a general pause. Second Subject Again this section starts in contrast to the end of the transition, with only the violins playing in a 2-part texture, with the second subject in the first violins and the accompaniment in the seconds. The bass then joins in at bar 58, leading to the end of the phrase at bar 61. In this bar the first violins pay a short ascending passage, reminiscent of bar 38 in the flutes which brings back the second subject, but now in a 3 part texture with the bassoons now also joining in. Several bars later in bar 64 the violas and bass also join in, imitating the first part of the second subject, and helping to build the texture of the piece. ...read more.

Closing Theme Bar 101 - 110 sees a whole piano section, helping to bring the second subject to an end bit by bit. It starts with the tune being played in the violins starting on D, using anacrusis to help add to the now lighter atmosphere, almost as if Mozart is teasing the listeners and joking around. In bar 103 the oboes play an inverted pedal quietly, with the bassoons joining in at bars 105, also piano, playing the closing theme starting on G. Because of the light atmosphere and texture in this section, there are no parts for the brass or timpani. Codetta The codetta begins at bar 111, starting at a forte dynamic, leading towards the end of the exposition. The main melody is played in the oboes and bassoons, as well as the bass and viola, while the rest of the orchestra except the timpani accompany them. The first and second violins are playing semi-quavers, which helps build the tension and excitement as the exposition draws to a close. At bar 117 the piece changes, with a cadential passage with most notes on the beat, with the first violins playing demi-semi-quavers, reminiscent of the first subject, mirroring motif A. Here the flutes are playing a pedal, the codetta ending at bar 121. ...read more.