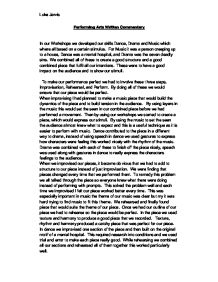 Performing Arts Written Commentary In our Workshops we developed our skills Dance, Drama and Music which where all based on a certain stimulus. For Music it was a person creeping up to a house, Dance was a mental hospital, and Drama was the seven deadly sins. We combined all of these to create a good structure and a good combined piece that fulfil all our intentions. These were to have a good impact on the audience and to show our stimuli. To make our performance perfect we had to involve these three steps, Improvisation, Rehearsal, and Perform. By doing all of these we would ensure that our piece would be perfect. When improvising I had planned to make a music piece that would build the dynamics of the piece and to build tension in the audience. By using layers in the music this would set the seen in our combined piece before we had performed a movement. Then by using our workshops we started to create a piece, which would express our stimuli. By using the music to set the seen the audience almost knew what to expect and this is a useful technique as it is easier to perform with music. Dance contributed to the piece in a different way to drama, instead of using speech in dance we used gestures to express how characters were feeling this worked nicely with the rhythm of the music. ...read more.

Once we had all of our parts we started to piece the sections together, while thinking about timing and relation to the music. Once we had the main structure and order of the pieces we combined them all together. Then rehearsal of the full piece could begin we could show out teacher the full rehearsal and then she would give us advice on how to improve the piece once this had been established we could rehearse the new idea and see if it worked well. In our performance objectives one was to have a piece, which lasted for three minutes. This meant that our piece had to have timing. In dance it was massively important to have structure and timing bearing in mind that we would be performing to a recorded track in music that we had recorded earlier. To make timing perfect we timed each section and rehearsed to a timer so that our timing was correct. This ensured our last dance movement ended when the music did. When rehearsing it was hard to concentrate and time yourself to a movement but once practised each member of the group finally mastered it. When rehearsing we also had to get the balance of the piece right, this would ensure the final combined piece would have equal parts of music, dance and drama included. ...read more.

In Drama we all wore black to symbolise equality and in Dance we used movements and dynamics to create a great piece. By using all of these techniques we expressed our pieces how we wanted them to be portrayed buy the audience. Before performing our group had to overcome our nerves and remember our structure and centre ourselves and go over the performance from rehearsal. This is where all our rehearsal really paid off, but we had to make adjustments to our costumes as not everyone had black. Our group decided to have one more rehearse before we performed ours to the camera, it was difficult for some members of the group became nervous because of being recorded. We performed our piece and the nerves soon left when we started our piece, overall the performance went well and there was only one minor hiccup. This was dealt with well by the person who went wrong. In our Dance piece it was long sequence and there was a lot to remember unlike the Drama piece we had just performed. Everything went well and the audience seemed to be in suspense as we had planned when improvising our piece. When performing the audience were all quite and our techniques using the music and dance together seemed to work. After our performance the audience congratulated us, which was reassuring. Overall our performance went well and I look forward to the next time I perform. Luke Jarvis ...read more.